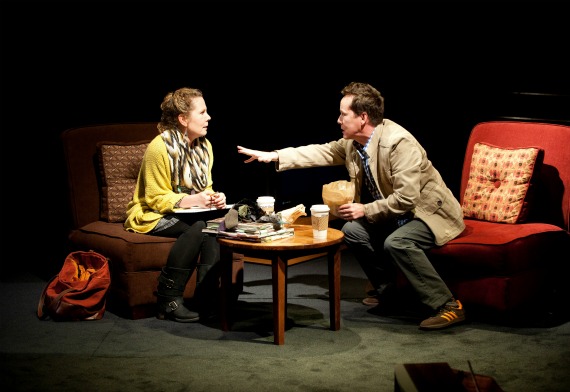 Ghost Light is a play about a theater director, Jon (Christopher Moore), who happens also to be the son of assassinated San Francisco mayor George Moscone. The play he is working on – Hamlet. The character he is struggling with – the ghost of king Hamlet, of course. (Refresher: in Hamlet, the ghost appears before his psychologically tormented son to disclose the gritty details of his murder and request avengement. Things go rather downhill for Prince Hamlet, from there).

As such, Ghost Light coasts heavily on the assumption that its audience is familiar with at least two things: Hamlet and San Francisco history, in particular the events of 1978 (pretty good bet, at the Berkeley Repertory Theater.) The play is not at all modest about its utilization of parallels; the troubled Jon receives his share of Hamlet-esque visits from an otherworldly relative.

There’s also a third rail: Ghost Light is, in fact, directed by Jonathan Moscone, none other. Moscone and playwright, Tony Taccone, play down the autobiographical aspect somewhat (character Jon apparently differs from Moscone in key ways, apart from his profession and family background), but it is clear that Ghost Light is a deeply personal project. And yet, the central fault of this otherwise expertly shaped and directed production may be that it is not personal enough.

The play begins with young Jon learning of his father’s assassination via television, and the scene is followed by an exchange – more of an interrogation – between the bereaved boy and the voice of a disembodied therapist. Jon’s responses are curt, angry. He has already set up the walls that are his psychological defenses. With the help of best friend Joanne (Robynn Rodriguez), adult Jon ostensibly tears these defenses down over the course of the play. But the man at the play’s conclusion, walking contentedly away from his father’s grave in an SF Giants cap, is only slightly less impenetrable than the awkward teenager with whom the story began.

The play is not linear, but rather unfolds through the emergence of a number of interlocking realities, including dream, fantasy, past and present (at one point Jon refers self-mockingly to his “postmodern period.” The irony is surely intentional). These, we are to understand, are the components of Jon’s fractured psyche. As Jon makes psychological progress, the play falls into a more and more straightforward narrative, the numerous realities either resolving into oblivion or interweaving harmoniously. In a powerful scene near the end, grown-up Jon looks on as child-Jon and father George waltz.

The technical execution of this fairly complex structure is the production’s forte; Moscone’s direction is expertly seamless in this regard. Scenic designer Todd Rosenthal deserves almost just as much credit for his multiple reality-accommodating set, in which the terrace of a gothic city hall doubles as the upper story of Jon’s lofted apartment. The production’s 11-member run crew (the people who schlep props on and off stage in the dark between scenes) deserves serious applause as well for managing the ever-fluctuating set.

This all makes for a delightfully strange, energetic first act. As the dust settles during Act Two, however, it becomes clear that the character of Jon is not as transparent as the coming-to-terms narrative requires him to be.

This shortcoming makes itself apparent in a scene approaching the climax, in which Jon at last meets Basil, a.k.a. “Loverboy” (Ted Deasy), an Internet acquaintance with whom Jon has carried on a virtual romance for some months. Jon, we discover, has been spilling his soul to this man via email, on the daddy issue in particular.

At this point, what should be the crushing pathos of Jon’s having felt the need to confide in a complete stranger – who, it turns out, could not be trusted to keep this information private – is eclipsed by the frustrating fact that we still have no clue what Jon’s letters might have entailed. For all the insight given thus far into Jon’s reeling psyche, the nature of the burden left by his father’s death – what has been presented as the heart of the matter, as it is in Hamlet – is still amorphous, with the play’s conclusion rapidly approaching.

By all means, this is a play worth seeing. It is consistently funny, well acted (the Moore-Rodriguez pairing in particular is a joy to watch), intriguingly shaped and mesmerizing to look at. Additionally, the play ventures on a number of intriguing tangents, such as modern communication technologies’ effect on social interaction and the roots of political apathy, to name a few, all of which could have been expanded to carry more of the play’s weight. Just go in with adjusted expectations: where Ghost Light sets up the anticipation of a highly personal core, it ultimately dares to dive only so far.

Ghost Light runs through February 19 at the Berkeley Repertory Theatre