9:47 PM: Oakland City Hall was broken into by multiple people tonight during Occupy Oakland protests, according to police.

Few details were available, although some reports from the scene indicate some protestors burned a city flag in front of the building. Police have since secured the building.

The city hall incursion followed the detention and possible arrest of more than 100 people today in Occupy Oakland protests.

At least 100 people were detained outside the YMCA at 2350 Broadway in Oakland after allegedly attempting to force entry into the building, according to Oakland police.

Police surrounded the protestors and stated that they had failed to comply with multiple orders to disperse, and therefore were under arrest.

A protestor broadcasting live video of the event said protestors were trying to escape through the YMCA after being surrounded by police, and not attempting to occupy it. A police spokesman said there was property damage to the YMCA but did not have details.

Protestors and police also clashed earlier today when a crowd that police estimated at around 450 to 500 marched from Frank Ogawa Plaza and attempted to take over the Henry J. Kaiser Convention Center. 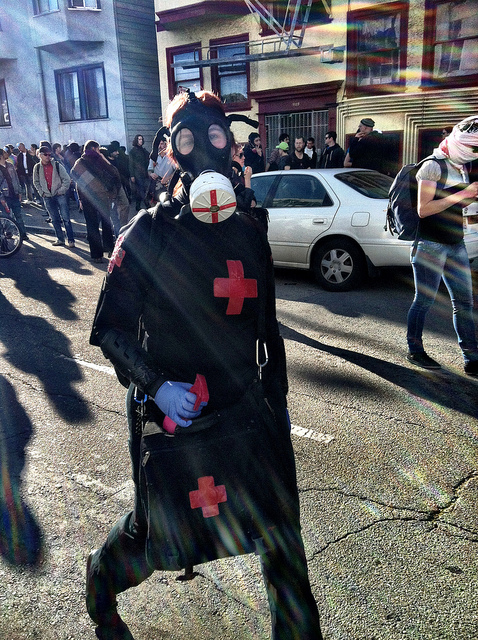 Occupy organizers said the plan today was to go to a vacant building that was to be their new home. Once they reach their destination, organizers had planned to kick off a two-day “Oakland Rise-up Festival” to celebrate the establishment of the movement’s new space.

Police said protestors began tearing down perimeter fences at the center around 2:30 p.m., and were ordered to disperse at 2:50 p.m.

Officers were allegedly pelted with bottles, metal pipe, rocks, spray cans, improvised explosive devices and burning flares, according to police. Police said they used smoke bombs and tear gas, and protestors at the scene reported officers using batons on individuals in the crowd.

As of around 5 p.m., 19 people had been arrested and three police officers had been injured. One of those officers suffered a laceration to the face and two received injuries to their hands.

By around 4 p.m., the bulk of the group had retreated to the plaza and regrouped. A second march set out from Frank Ogawa Plaza around 5:30 p.m.

3:56 PM: Police tear gassed Occupy Oakland protesters this afternoon near Lake Merritt and warned them to leave an area where they had gathered or they would be forcibly removed.

At about 3:45 p.m., the crowd still had not dispersed around the intersection of Jackson Street and 12th Street.

Police declared the intersection an unlawful assembly area and began running toward protesters with their shields.

Occupy Oakland organizers rallied at Frank Ogawa Plaza before they began marching earlier this afternoon. During the rally one of the organizers, Shake Anderson, said, “We are here to protect each other and to be civil disobedient. … We’re doing it to change the world, not just today but every day.”

The march started just after 1:30 p.m., with dozens of police nearby in riot gear.

The protesters headed toward Laney College. Some people were wearing bandanas over their mouths and others were holding signs saying, “We are the 99%.” A marching band dressed in pink and black tutus and neon pick tights also was in the crowd.

Occupy organizers said the plan today was to go to a vacant building that was to be their new home. Once they reach their destination, organizers had planned to kick off a two-day “Oakland Rise-up Festival” to celebrate the establishment of the movement’s new space.

“Clearly there were some tactical mistakes today,” said Sean Gallagher, 23, who was among those in the crowd. … I think the goal of today to occupy a building was to give offices to working class people to organize.”

Police are advising motorists that they have closed streets in the area.