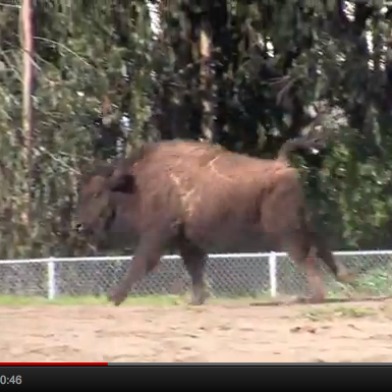 A baby bison in a paddock at San Francisco’s Golden Gate Park died Wednesday after it apparently ran into a fence in fright during an encounter with a small dog that had gotten into the enclosure, city and zoo officials said today.

The incident was reported at about 9 a.m. Wednesday at the paddock. Recreation and Park rangers responded to find a small dog running around a part of the enclosure where seven recently arrived young bison were being quarantined as they adapted to their new surroundings, zoo spokeswoman Lora LaMarca said.

They found the dog’s handler trying to coax the dog from the enclosure.

The dog eventually burrowed under a fence and exited the paddock, likely at the same spot where it came in, park officials said.

Park officials notified the San Francisco Zoo, which is responsible for the bison in partnership with the Recreation and Park Department. The seven young calves were added to the paddock in November.

Zookeepers responded and found that one of the small bison had suffered a laceration to its left side and three broken ribs, LaMarca said.

She said the bison apparently ran into a fence in the enclosure because it was “really upset about the dog that had gotten in there.”

The young animal was briefly taken out of the enclosure but was later returned to the herd, LaMarca said.

But then, at about 5:20 p.m., officials learned that the bison had died.

The cause of the animal’s death is under investigation. A necropsy was under way late this morning, LaMarca said.

The dog handler was found to have five dogs without a leash. The handler, who has not been identified, was cited for animal disturbance and failure to use a leash in a designated on-leash area, park officials said.

There has been a bison herd in Golden Gate Park since 1877, and the herd has been at its current location since 1899. The paddock fencing was upgraded in 2007 and the paddock service area was renovated last fall in preparation for the arrival of the new calves.

Park officials said they plan to investigate how the dog got into the enclosure.