DA Gascon To Be Sworn In At Mission High 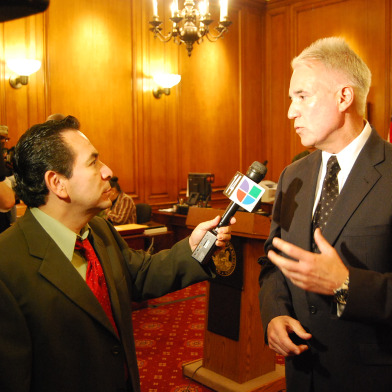 Gascon was appointed district attorney a year ago by then-Mayor Gavin Newsom to replace Kamala Harris, who was elected the state’s attorney general.

He easily won a four-year term in the November election and will celebrate the start of the term with an inauguration ceremony at Mission High School on Thursday evening.

Gascon said earlier this week that he selected the Mission District site for the ceremony because of the neighborhood’s significance to the Hispanic community.

Gascon, who served as assistant police chief in Los Angeles and chief in Mesa, Ariz. before being named San Francisco’s top cop in 2009, won 62 percent of the ranked-choice votes in the November district attorney race.

In his year as the appointed district attorney, he has introduced new programs including neighborhood courts to handle certain low-level, nonviolent crimes, and a school program to fight student truancy.

Gascon plans to outline his vision for the four-year term at Thursday’s swearing-in ceremony, scheduled for 5 p.m. at the school located at 3570 18th St.