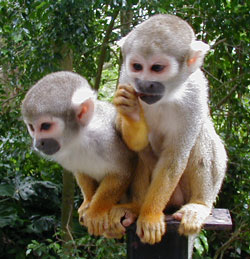 San Francisco Zoo officials are asking for the public’s help today after a monkey was stolen from an exhibit overnight.

This morning zoo staff discovered a 17-year-old male squirrel monkey, “Banana-Sam,” was missing from an exhibit that had been breached by vandals, according to a statement released by the zoo.

Despite the monkey’s small and cute appearance, it should not be handled as a pet because it has extremely sharp teeth and “will definitely bite if provoked,” officials said in the statement.

According to zoo officials, the vandals cut a perimeter gate overnight and climbed on top of a roof sheltering five primate exhibits. The vandals cut two holes into the mesh of the squirrel monkey exhibit.

“This was a criminal act of vandalism and trespassing, and we are working with police to identify the perpetrators,” San Francisco Zoological Society president and executive director Tanya Peterson said.

Banana-Sam arrived at the zoo with 20 other squirrel monkeys after funding for a local research program was discontinued.

“He is a valued member of the zoo, and we wish for a safe and speedy return,” officials said in the statement.

Anyone with information regarding Banana-Sam’s whereabouts is asked to contact the San Francisco Police Department at (415) 553-8090.

The security at the zoo was laughably simple to breach. Anyway, STILL WAITING for the goddam L Taraval.

Photos of two squirrel monkeys, neither of whom are Banana-Sam, from MonkeyPictures.net