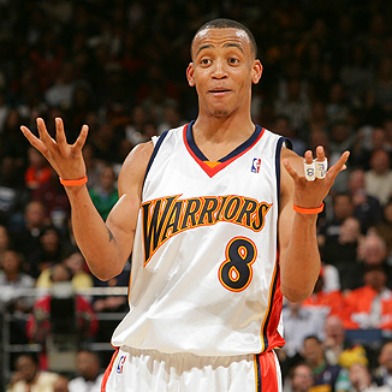 The former director of community relations for the Golden State Warriors filed suit today alleging that the basketball team’s star player, Monta Ellis, sexually harassed her, including by sending her a graphic photo of his genitalia.

Erika Smith claims in her lawsuit, which was filed in Alameda County Superior Court, that the Warriors tried to cover up the alleged misconduct by Ellis and retaliated against her on Aug. 5 by laying her off.

Smith’s lawyer, Burton Boltuch, said Smith started working for the Warriors in September 2007 and received positive work reviews, but after she rejected a request by the team in February that she resign and take “a little money,” the team began removing some of her job duties.

The Warriors ultimately told Smith that she was being laid off because her job was being eliminated, according to Boltuch.

Smith, who is single and is in her 30s, told reporters at a news conference in Boltuch’s office that Ellis began texting her in November 2010 but she told him she wasn’t interested in having a relationship with him because he is married.

Boltuch said Ellis’s texts, which sometimes started with the phrase “Hey Sexy,” weren’t work-related and were sent at odd hours.

He said Smith “was embarrassed and intimidated and felt scared and helpless” because she feared that the team wouldn’t believe her story.

“Mr. Ellis was and is the team’s star and makes $11 million a year, and my client definitely is in the 99 percent,” Boltuch said.

He said Smith “feared she would lose her job, and it’s very apparent that all her fears are justified.”

Boltuch said Smith’s suit seeks recovery of lost income, including back wages and benefits, compensation for severe emotional distress and injunctive relief to order the Warriors to remedy what the suit alleges is illegal conduct.