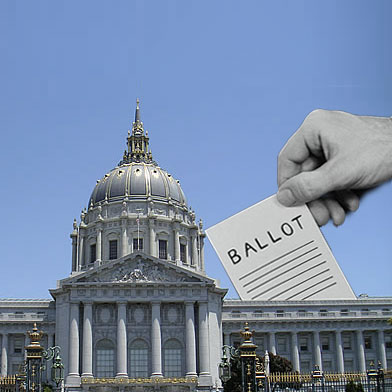 A group seeking to limit commercial activities at San Francisco’s Coit Tower and protect it from damage filed papers with the city’s Department of Elections on Wednesday and plans to get the initiative on the June 2012 ballot.

The initiative is in response to San Francisco’s issuance in October of a request for proposals by contractors to lease and operate the elevator, food and beverage concession stands and gift shop at the landmark atop Telegraph Hill, which is visited by more than 200,000 people annually.

Along with leasing the operations, the city would also allow contractors to hold private, late-night parties at the tower.

But the Protect Coit Tower Committee, which filed the papers at City Hall, plans on collecting 9,700 signatures during the next two months to qualify an initiative for the June ballot that would strictly limit commercial activities and private events at the tower.

“Closing off Coit Tower to only the highest bidder, and turning it into another corporate party venue is wrong,” said Jon Golinger, chair of the committee and president of the neighborhood group Telegraph Hill Dwellers.

Golinger said he also worried about the damage such parties could do to the tower and its historic murals.

“I like a beer as much as anyone else, but wandering around a historic mural, or in a historic building … we all know what happens at wild parties,” he said.

The group’s proposal would also make it city policy to prioritize money raised at the tower toward preserving the murals there, protecting the tower’s structure, and beautifying the surrounding Pioneer Park.

In the last fiscal year, San Francisco received more than $909,000 in revenues from elevator fees and various concessions at the tower, according to the city.

But Golinger said the city has not used that money on the tower, instead letting it and the surrounding area fall into disrepair.

In the city’s request for proposals from contractors, it pledged to give 1 percent of the annual rent for the site to the San Francisco Arts Commission, the agency in charge of maintenance of the murals.

Golinger said that amount would be an increase from the current funding for upkeep of the murals, which is spent as needed, but is “a drop in the bucket for what it takes to restore them.”

He said some of the murals have gotten water-damaged and will need extensive repairs.
“We need to be fixing the immediate problem and also protecting them for years to come,” he said.

Signatures will begin being gathered for the initiative in a couple of weeks, and must be turned in by Feb. 6 to qualify for the ballot.

“We’re hoping the statement of the people that this is an important priority will make a difference,” Golinger said.