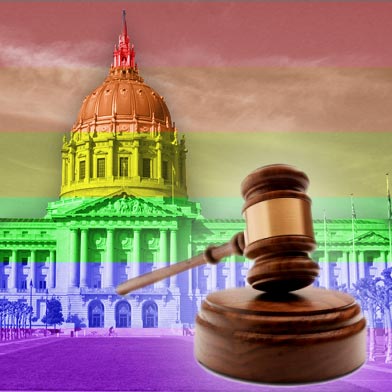 A federal appeals court in San Francisco seemed inclined today to rule that the judge who struck down Proposition 8 last year didn’t need to disqualify himself from the case because he is gay.

A panel of the 9th U.S. Circuit Court of Appeals heard arguments on a challenge filed by supporters of Proposition 8 to now-retired U.S. District Judge Vaughn Walker. The judges made no immediate decision and will issue a written ruling later.

Walker, after presiding over the trial of a lawsuit filed by two same-sex couples, ruled in San Francisco last year that the 2008 voter-approved ban on gay and lesbian marriage violated the U.S. Constitution.

The initiative’s sponsors say he should have disclosed that he had a potential conflict of interest because he was in a long-term relationship with another man and may have wanted to marry.

But Proposition 8 attorney Charles Cooper barely began his argument before Circuit Judge Michael Hawkins broke in to ask, “So a married man could never hear a divorce case?”

Judge Randy Smith asked, “Do we have any evidence that (getting married) is what he desired to do?”

Walker, who disclosed his relationship after retiring this year, has never stated whether he wanted to marry.

Cooper argued that judges are obligated to disclose information that might be relevant to whether they have an interest in the outcome of a case. He asked the court to set aside Walker’s ruling and order a new trial before a different judge.

David Boies, representing the two couples, argued that the disclosure rule applies only when a judge has a direct financial interest and not when a judge is a member of a large group whose constitutional rights may be vindicated.

On another issue argued today, the panel appeared to favor keeping a videotape of the 13-day trial sealed.

Hawkins, citing a statement by Walker during the trial that the video would not be broadcast, said, “The question for me is whether lawyers can rely on promises of trial judges.”

Both matters heard today are peripheral to a central appeal in which the Proposition 8 sponsors are challenging Walker’s conclusion that the measure violates the constitutional guarantees of equal treatment and due process.

The same panel heard arguments on that issue a year ago and has taken that question under consideration.

Although that part of the appeal wasn’t on the court’s agenda today, it appeared to come up briefly when Cooper at one point told the court that the Proposition 8 sponsors are not claiming that gay marriages hurt heterosexual unions.

His comment came after Smith asked, “What about the interest of a married heterosexual judge who desires to maintain the definition of marriage as being between a man and a woman? Would he have to disclose that?”

Cooper, in arguing that such a judge would not have to disclose his views, answered, “We have disavowed any claim that an individual (heterosexual) marriage would be harmed (by same-sex marriage).”

When questioned further by Judge Stephen Reinhardt, Cooper said the Proposition 8 sponsors had argued that “the institution of marriage would be negatively affected” over time by same-sex marriage, but said, “We do not believe any individual marriage would be harmed.”

Boies picked up on the comment in a news conference after the hearing.

“Today you heard that allowing marriage equality isn’t going to hurt anyone else’s marriage,” he said.

“That’s what we said from the beginning,” Boies maintained.

The appeals court has no deadline for ruling on the appeals and could rule on the three issues either together or separately. Its decisions can be appealed further to an 11-judge appeals court panel and then to the U.S. Supreme Court.