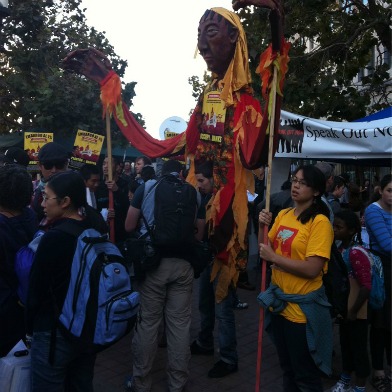 9:28 AM: Operations have partially resumed at the Port of Oakland this morning after protesters participating in the general strike organized by Occupy Oakland shut down the port Wednesday night.

Port officials said only one of the entrances to the port, at Third and Adeline streets, remained blocked as of 8:30 a.m. today.

“Port employees have been directed to show up at work as normal, pursuant to regular work schedules,” port officials said in a statement.

There appear to have been no injuries or property damage in the port area during Wednesday night’s blockade, according to port officials, although they said there was a “limited incursion into a private rail facility, and trespassers were escorted off peacefully.”

Port officials called on protesters to allow workers to get back to their jobs today.

“Any additional missed shifts represent economic hardship for maritime workers, truckers, and their families, as well as lost jobs and lost tax revenue for our region,” port officials said.

City officials said police responded to a group of protesters who had broken into and occupied a downtown building and set several fires late Wednesday night.

Just before midnight the Police Department issued its first order to the crowd to clear the area around the occupied building. Police said they continued to be attacked with rocks, lit flares, roman candles and bottles.

Tear gas and bean bag rounds were fired into the crowd around 12:10 a.m.

Officials said the operation was kept separate from a group of peaceful protesters who remained at Frank Ogawa Plaza.

Protesters had cleared the occupied building by 2:10 a.m., officials said.

Officials also reported there was also a lot of vandalism on private and city buildings. The city’s Public Works Agency was scheduled to board up the 16th Street building and other damaged buildings in the Civic Center area.

The Tully’s coffee shop at Frank Ogawa Plaza had broken windows and along Broadway graffiti had been sprayed on most buildings by 2 a.m. this morning. Many other areas had been vandalized overnight.

11/3 1:45 AM: Police have surrounded the north and east side of Frank Ogawa Plaza and are throwing smoke grenades into the area near where Occupy Oakland protestors have set up camp.

Near Broadway and 14th Street, Frank Ogawa Plaza has been declared an unlawful assembly and people have been asked to clear the plaza by police in riot gear just before 1:15 a.m.

Several arrests have been made as the crowd refuses to disperse.

Smoke grenades were thrown into the plaza away from where the encampment stands.

One man appeared to be knocked unconscious by a possible rubber bullet and was carried into the camp to be treated by a camp medic.

Crowds are chanting, “Go home!” to the police lining the plaza. Others are sitting in front of the plaza and singing while others are behind protester-made barricades.
The tent city in the center of the plaza remained intact as of 1:30 a.m.

11/3 12:53 AM: Tear gas has been deployed on an Occupy Oakland crowd marching through downtown Oakland early this morning.

There was a tense confrontation between law authorities and a few hundred protesters near 17th Street and Telegraph Avenue around midnight after what the Occupy Oakland Twitter account said was a reopening of a foreclosed building at 520 16th St. late Wednesday night.

Police in riot gear released tear gas onto the crowd and then declared the crowd an unlawful assembly.

Protesters have set several dumpsters on fire as a barricade to block police near 17th and Broadway. Other people have smashed windows along Broadway, as police push the crowd toward Frank Ogawa Plaza.

The crowd is chanting, “These streets are our streets.”

The Occupy Oakland Twitter feed had asked protesters Wednesday night, “If you can, come to support the space and prevent police takeover.”

11/2 10:49 PM: Many Occupy Oakland protesters have returned to Frank Ogawa Plaza after demonstrating at the Port of Oakland this evening, forcing the Port to shut down operations.

Port officials said tonight’s protest was peaceful and no injuries or property damage were reported.

Maritime operations are still shut down tonight and officials said operations will not resume “until it is safe and secure to do so.”