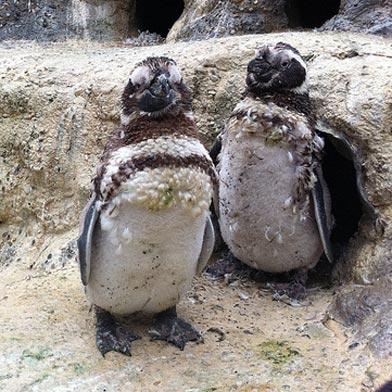 Six penguins that were found emaciated on a shoreline in Brazil are making a new home at the San Francisco Zoo starting today.

The Magellanic penguins were scheduled to make their debut at 9:30 a.m. at the zoo’s Penguin Island.

They were part of a group of 373 emaciated penguins found in October 2008 on a beach near Rio de Janeiro. The birds were flown on a military plane to more abundant food source areas, zoo spokeswoman Lora LaMarca said.

However, the six penguins coming to San Francisco were eventually deemed non-releasable because “for whatever reason, they didn’t acclimate well to their new surroundings,” LaMarca said.

The penguins spent a couple of months down the coast at the Monterey Bay Aquarium before coming to San Francisco, she said. They will join the 45 penguins already in the zoo’s colony.

The San Francisco Zoo has the largest colony of Magellanic penguins of any zoo or aquarium in the world, according to zoo officials.

Scientists believe a combination of commercial fishing, oil pollution and climate change is depleting the supply of small fish that the Magellanic penguins feed on, making them a near-threatened species.