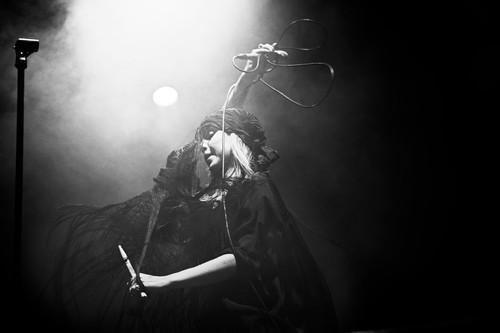 The lights go down. Massive, bass-heavy drones score a scene of thickly billowing smoke and irregularly flashing strobes the size of searchlights. Eventually, these signs of reckoning cease, and Lykke Li launches into a decent rendition of Wounded Rhymes standout “Jerome” – a yearning, relatively percussion heavy song that could have made real impact, had it not just been dwarfed by, what now appear to have been, severely oversized theatrics.

Following this initial disconnect, a slew of things throughout Wednesday’s show similarly proved too big for the band: the partially-filled Fox Theater, for one; the bassist on an elevated platform, looking something out of the This is Spinal Tap playbook, for another; third, a partial cover of “Silent Shout” by fellow Swedes The Knife and a mash up of Kanye West‘s “POWER” with Wounded Rhymes‘ “Youth Knows No Pain” – two very bold gestures.

While I am all for covers, and Lykke Li’s were perfectly good, in fact making for a few of the show’s standout moments, her decision to invoke this veritable electronic deity, The Knife, and the reigning king of rap ultimately served to emphasize her relative diminutiveness.

Diminutiveness, it seems, is precisely what Lykke Li strove to avoid with Wounded Rhymes. The album, asserting an aesthetic of black-and-white gloom and austerity (nowhere close to that of The Knife’s Silent Shout or even parts of Kanye’s My Beautiful Dark Twisted Fantasy, however), looks like an attempt to bury the indie-pop cuteness of her previous Youth Novels. Its content, though still tinged with adolescent moodiness, is more pronouncedly adult, exploring themes of sex, longing, regret, self-loathing and narcissism, with the precarious intensity of being a few drinks in.

On the live stage, this translated into the oversized gestures discussed above, and a lot of black. Lykke Li wore a pants-and-shawl get-up of this single color, now and again wrapping herself in ominous curtain columns that hung from the stage rafters.

Her selections from Youth Novels, “I’m Good, I’m Gone,” “Dance Dance Dance” and “Little Bit,” were galvanized to good effect, eliminating the preciousness of the album versions. Wreathed as the singer and her stage were in black, however, lines like “Having troubles telling how I feel/ but I can dance dance dance” sounded pretty ridiculous.

The show’s best moments were the somewhat sparer vocal exhibitions. The singer’s lone repetition of “oh sadness, I’m your girl” at the end of “Sadness Is a Blessing,” just her and a percussive skeleton, was particularly poignant. The show peaked when Lykke Li brought opening act First Aid Kit back onstage for an extra full-bodied rendition of Wounded Rhymes album-ender “Silent My Song.” When she wasn’t crouching amidst oversized gestures and imposing stage ornaments, the emotion in Lykke Li’s gorgeous songwriting was able to emerge.

Lykke Li seems very much still just a girl, showing off a new image that could use some tailoring. While covering The Knife and mashing up her song with Kanye’s made this all the clearer, these bold moves also indicate an ambition and movement that is extremely promising. The next time she comes around, this exceptionally dynamic artist’s approach may have completely changed. 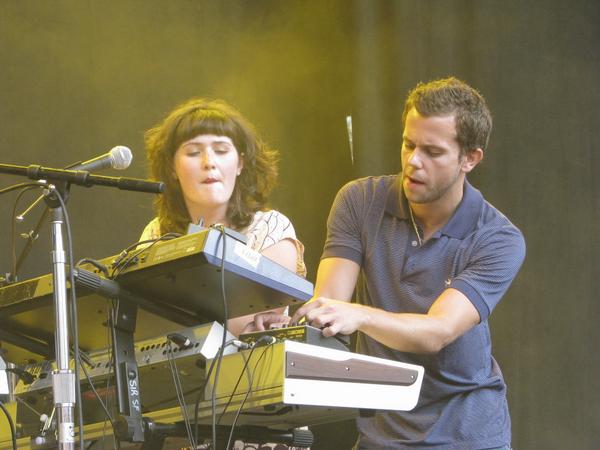 Anthony Gonzales’ M83 has always been about maxima: maximal emotion, maximal volume, maximal pleasure. While the most recent product of this vehemence, a double album called Hurry Up, We’re Dreaming, is of debatable merit, Gonzales’ exuberant disregard for aesthetic limits and the boundaries of “cool” does result in a singularly delectable live show.

The spectacle began with an appearance from this equal parts frightening and endearing little creature. Slowly elevating his palms above his head while the synthesizers weaved their neat, intricately patterned tapestries, this enchanting ambassador from M83’s patent dream world extended a clear invitation: to be transported, the only prerequisite being that you just go with it.

The band then arrived and launched into Hurry Up, We’re Dreaming‘s ecstatic “Intro,” with vocalist Morgan Kibby admirably supplying the parts provided by opera-trained Zola Jesus on the recorded version. Like nearly every song from their mammoth new 2xLP that the band performed on Thursday, the song culminated in a doubly guitar-fortified electronic bath, its decibel count rapturously toeing the pain/pleasure threshold.

Around the band, The Mezzanine’s stage fluoresced with a U-Haul’s worth of lighting props, including a floor-to-ceiling backdrop of twinkling stars. Conforming to no obviously coherent aesthetic schema, the scene shone with the cheerful immoderation of a home encrusted in distasteful Christmas decorations. It was a fitting backdrop for songs like jubilant guitar jam “One Year, One UFO,” all-engines-go fireballs like “This Bright Flash,” and jumbo-sized choruses like the ones in “Midnight City” and “Steven McQueen.”

However, with the exception of still-smoldering single “Midnight City,” the audience responded most to tracks from the band’s previous effort, Saturdays=Youth, and for good reason. “Kim and Jessie” is, hands down, one of the best electro-pop jams of the last coupla’ decades, and the viscerally moving “We Own the Sky” claims some serious playlist real estate, as well.

The choices from Saturdays=Youth, significantly less overwrought than almost everything on Hurry Up, We’re Dreaming, also served to best showcase Kibby’s vocal work. Ethereal and slightly sexualized, her take on the shoegaze vocal tradition is a central axle to the band’s current sound, and one that frequently goes unrecognized, with M83 usually billed, somewhat misleadingly, as a solo project.

For their encore, the band chose two lesser-known gems from the album, the hauntingly beautiful “Skin of the Night” and 9-minute, pure, uncut dance medicine “Colours” – a suitably epic end to a characteristically epic show.