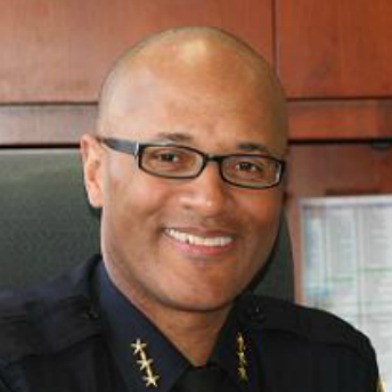 Oakland Police Chief Howard Jordan said police will allow protesters to re-enter Frank Ogawa Plaza late this afternoon but will remove anyone who tries to camp out there.

He said the police sweep at the plaza early this morning went more smoothly than the raid three weeks ago, in part because he said no one threw rocks at officers this time.

Thirty-two people were arrested in the raid this morning, and another person was arrested around noon for spitting at an officer at 14th Street and Broadway.

Police spokeswoman Johnna Watson said that in addition to spitting at officers, that man threw a gallon of water onto them and knocked down barriers at the plaza.

Jordan said that once the city finishes cleaning up the plaza, people can’t be kept away because it is a public space. But he said police will monitor the plaza all night to make sure tents aren’t set up again.

He also said that if anarchists show up tonight trying to cause trouble, “We intend to have sufficient officers to arrest people who break the law.”

Jordan said officers from other agencies will be available again tonight if necessary.

This morning, Oakland police were assisted by officers from the San Leandro, San Francisco, Hayward and Fremont police departments, and sheriff’s deputies from Alameda, Santa Clara and San Mateo counties.

Jordan said nearly 100 Oakland police officers and 300 officers and deputies from other agencies participated in this morning’s enforcement. No injuries were reported to officers or protesters, he said.

Oakland is paying in full for the assistance, since the raid was a planned event, Jordan said. However, if protests get out of hand tonight, that would constitute an emergency and a mutual aid agreement would be activated, meaning Oakland wouldn’t have to foot the whole bill for the response.

He said police will “facilitate” the rally by escorting protesters as they march from the Oakland Public Library to Frank Ogawa Plaza.

Jordan said there are about 25 tents at a second encampment at Snow Park, near Lake Merritt, which is about half a mile away from Frank Ogawa Plaza.

He said police plan to remove people in the tents from the park eventually but that it’s not a high priority now because “Snow Park has never been a problem for us since there has been no violence or drug dealing.”

All of the protesters were gone from the plaza, except for Zachary Running Wolf, a tree-sitter who is perched atop a small wooden platform in a tree there.

Jordan said police are leaving him alone for now as they look into what his legal rights are to be there.

This morning, he could be heard shouting from the tree, “This is native land. I’m not coming down.”