Have You Seen This Dog? Puppy Abducted From SF SPCA Tuesday Afternoon 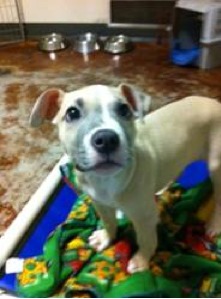 The San Francisco SPCA is offering a $500 reward for the safe return of a puppy stolen from their adoption center just hours before he was to go home with his new family.

James, an 8-week-old light brown and white mixed breed puppy (that’s him pictured at the right) was abducted at around 3:45 Tuesday afternoon, by a Latino couple in their mid-30’s that was accompanied by a child.

The puppy was, says SF SPCA spokesperson Krista Maloney, scheduled to go home with his new adoptive family this evening.

According to Maloney, the SPCA has photos and video footage of the family they believe took the dog, which she describes thusly:

Maloney says they fled the scene in older white Sedan, possibly an Honda Accord or Toyota Camry.

“We are very concerned for James’ well-being and are eager to have him back at the SF SPCA,” says Maloney in a statement.