Gavin Newsom Officially Gives Up On Living In SF 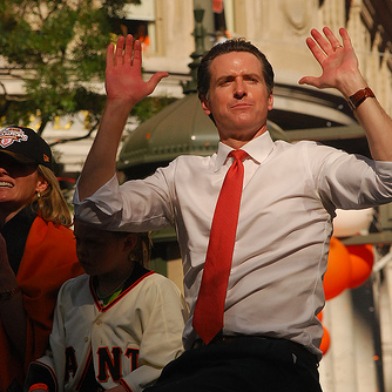 When former SF mayor, now Lt. Governor Gavin Newsom packed up his family and moved into his in-laws’ Marin estate, speculation flew. Was he pursuing a Marin County political office? Or would he be returning to SF once they found a home befitting their expanding brood? Now, apparently, we know one thing — if they’re coming back, it’s not any time soon.

Shortly after the run to Ross, their son, Hunter Siebel Newsom was born.

Since then, both news orgs and political rivals have repeatedly asked Newsom if he would be returning to San Francisco, with no real response.

In July, Newsom was removed from the San Francisco Democratic County Central Committee, after failing to respond to one such query.

“Once an elected official is no longer a registered voter in San Francisco,” we reported in July, “they must be removed from the DCCC according to the rules of the body.” An email sent to Newsom’s spokesperson asking where he was registered to vote was not responded to at the time.

But now it looks like he’ll be registering (if he hasn’t already) in the Marin County town of Kentfield: as the Chron’s Leah Garchik reports “Gavin and Jennifer Siebel Newsom have bought a house in Kentfield, and will be moving there ‘soon,’ says the lieutenant governor.”

According to Garchik, “although they’d been close to renting in the Presidio, (Newsom) said, ‘We drove up the driveway'” of their new Kentfield home “and said, ‘Wow, this is it.'”

The Newsom brood, San Francisco renters? That I would have liked to see — or maybe I’m just imagining the Tenant Troubles that could have ensued. Oh, well.