Being in Character: Working For The Mouse 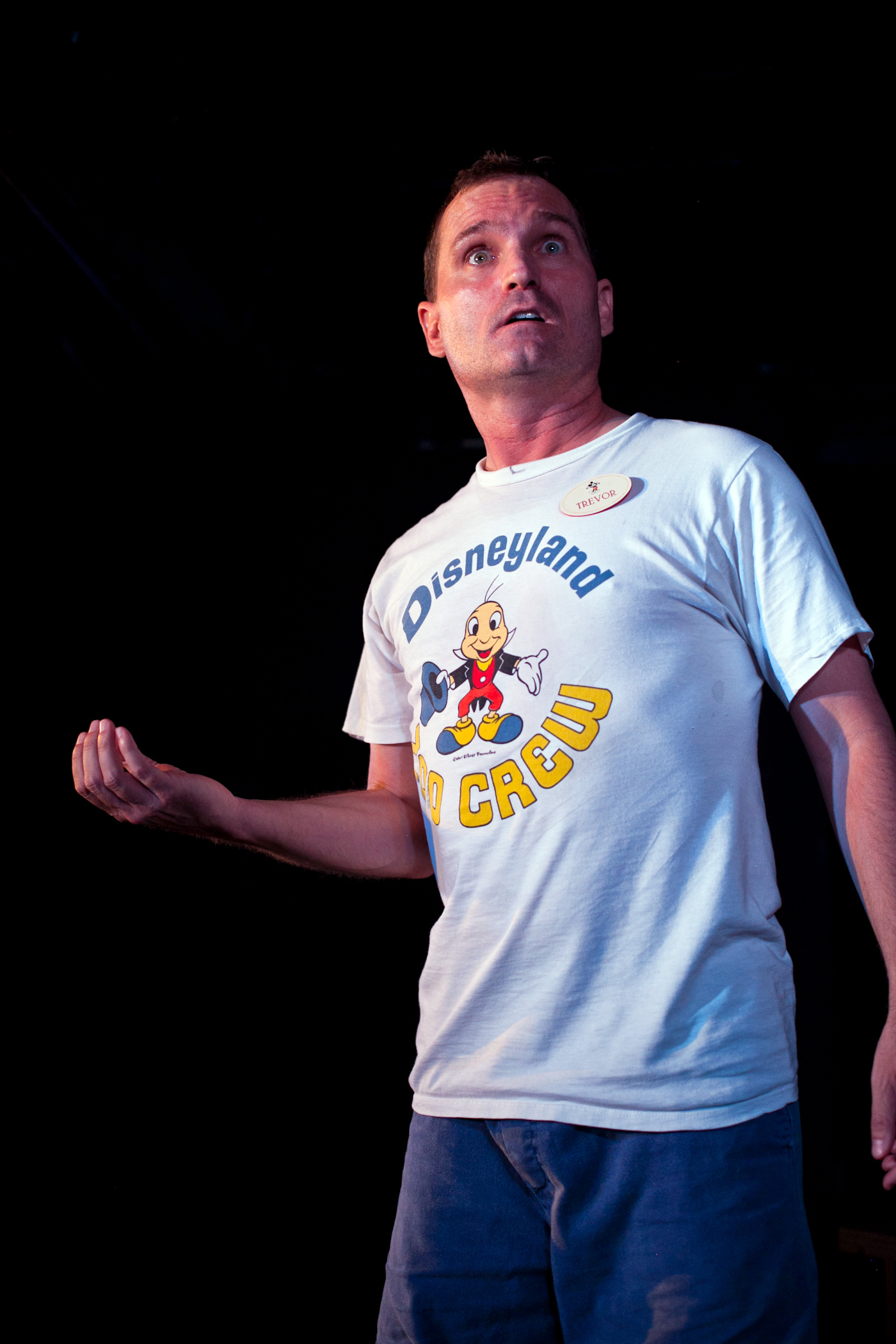 As one grows older, visits to Disneyland begin to raise questions. Lots of questions.

Perhaps foremost among them: who are the Donald Ducks and Mickeys that roam the park (presuming they aren’t robots – not to be ruled out), and what goes on behind closed doors, within the character community?

If they are human, then surely there must be a perfectly bizarre treasure trove of rivalries, sex, sweaty locker-room gossip, even acts of insubordination, ripe for the shelling.

The Disney Corporation is famously a fortress when it comes to providing answers; the viability of the fantasy they are selling depends on it. In Working for the Mouse, though, ex-“Casual Seasonal Pageant Helper” (that’s corporate for “character”) and actor/playwright Trevor Allen dishes the dirt, chronicling his four years spent working his way up from Pluto to The Mad Hatter and all the decidedly un-Disney (and frequently drug-fueled) shenanigans along the way.

With Allen as sole performer, the play essentially amounts to carefully structured storytelling, crammed with impersonations. Scenic design on the EXIT Theatre‘s small stage is close to nil – just a steel bench and an “Employees Only Beyond this Point” sign. There are no character costumes; Allen wears a Disney t-shirt and shorts.

If you’re expecting stand-up comedy, though, you’ll probably be disappointed. While the show is humorous, probably in proportion to the amount of time you’ve spent at Disneyland (the innumerable kernels of insider wisdom are gold; the three most dreaded character positions, I now know, are grad night Eeyore, photo Friar Tuck, a.k.a “Phuck,” and anything in Toontown, better known in certain circles as “Mousechwitz”), it’s not exactly a knee-slapper.

Nor is Working for the Mouse an attack piece. Allen declines to indulge in the sardonic self-mockery that would be just so easy. Rather, his tone remains unshakably warm-hearted and charitable toward his former occupation.

While this unapologetically good attitude greatly tempers the work’s potential hilarity, it is also its saving grace – what, along with Allen’s uncanny ability to immerse the audience in his backstage-Disney world, keeps the one-man show from lapsing into a drawn out stand-up routine.

The play is, at heart, a fairly standard coming-of-age story. Allen’s summer-after-high school character, seeking work at The Magic Kingdom with the hope of delaying or possibly eliminating the imperative to grow up, receives the opposite of what he bargained for. Struggling to find his place among the sordid, immature and at times pathetic lot that comprise the character population, Allen undergoes the token parade of lesson-teaching adolescent experiences that, so the common narrative goes, turn a boy a man.

One way or another, they show Allen the importance of personal accountability and responsibility, self-esteem, imagination and, most importantly, when to and not to break the rules. Endowed with his new knowledge, Allen must be banished from The Magic Kingdom into the world of adulthood. It’s an original sin tale par excellence.

Anyone who grew up watching PG-13 movies is more than familiar with this sort of story. That’s not to deride Allen’s work; his is a novel spin, well told. However, everyone has his/her own narrative oversaturation threshold, and the enjoyability of the play will likely come down to that.

Also, fair warning: Allen’s acting style is very much that of, well, an ex-Casual Seasonal Pageant Helper – cartoonishly exaggerated expressions, big arm and hand gestures, and voice gymnastics that at times put Robin Williams to shame. Obviously, this is ideal for the role at hand. Just consult your exuberance threshold ahead of time.

Individual thresholds notwithstanding, it is immensely refreshing, these days, to see a work that could have been so bitingly ironic, cynical and crass, march so proudly in the opposite directions.