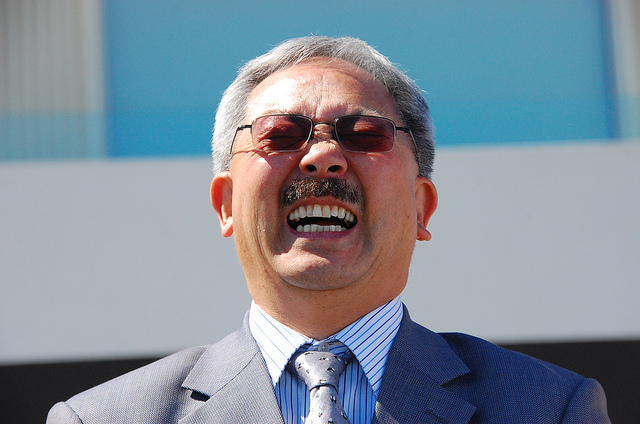 Celebrity sponsors, boat-loads of Silicon Valley cash, and news coverage in outlets coast-to-coast, and in Europe — it’s safe to say the “2 Legit 2 Quit” video released last week in support of Mayor Ed Lee’s candidacy has everything. Even, it turns out, an apparent copyright violation.

Used along with San Francisco Giants closer Brian Wilson’s dance moves and cameo endorsements from tech industry moguls — none of whom, it’s been reported, are eligible to actually cast a vote for Ed Lee — is a photo of the mayor in full-on smile mode. The photo, seen shortly after the 46-second mark, was shot by ex-Wired editor Todd Lappin, and first published in the Bernalwood blog, of which Lappin is editor.

“It’s frankly just kind of funny,” Lappin said. “Everyone’s passing around this viral video, and it’s like, ‘Wait a minute — that’s my picture.'”

There’s “only two ways” the video’s producers, Portal A Interactive, could have nabbed the image, Lappin says: either they grabbed it off of his Flickr feed, or from somewhere else that made the grab.

And that’s fine — as long as the photo is properly attributed. “I’m not trying to make money from it,” explained Lappin, who would have been a-ok with giving the producers permission, or merely receiving credit in the film. But he didn’t, and “that’s a copyright violation,” he pointed out.

We should know: SF Appeal recently unwittingly used without attribution one of Lappin’s photos. Lappin tweeted us our mistake and we removed the photo — his usual SOP, “call it out on Twitter, and let the shaming run its course” — but has yet to receive any response via the baby of Biz Stone (who appears in the video). He’s also yet to receive any response from Portal A.

We had better luck, reaching Portal A’s Zach Blume via telephone on Monday evening. The video’s been a success for the company, with over 333,000 views on YouTube by most recent count — and was produced for a total of $17,000, half of which has been paid, with none of the celebrities involved receiving any compensation for their appearances.

Without saying how the photo was discovered or how it came to be put in the video, any possible copyright overstep was an honest mistake, Blume said. “We’re going to check back on that,” Blume said in a statement. “If it was an oversight, it will be addressed.”

In a follow-up email a few hours later, Blume elaborated “it’s a picture from Flickr that was overlooked and is now credited (see info section). Doesn’t exactly seem like breaking news.”

Not that Lappin seems to mind much. When asked if he’s inclined to support Lee in next Tuesday’s election, Lappin responded, “I am.”

“My opinion’s soured a little,” he admitted, “but of all the candidates, so far, he interests me the most.”