8th Avenue between Geary Boulevard and Clement Street will be closed from 7 a.m. to 3 p.m.

No Muni bus service will be affected.

The following street closures will be required from 6 a.m. to 7 p.m.:

The 48 Quintara 24th Street Muni route will be affected.

The following street closures will be required from 7 a.m. to 7 p.m.:

The 10 Townsend Muni route will be affected. 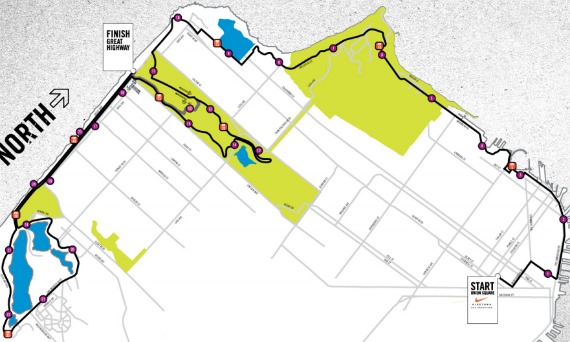 Nike Women’s Marathon
On Sunday the 8th annual Nike Women’s Marathon will be held throughout San Francisco, beginning with staggered start times at 5:30 a.m. for walkers and 7 a.m. for runners at Union Square and finishing at The Great Highway between Lincoln Way and JFK Drive by 4 p.m.

· Runners will continue north along the Embarcadero onto Jefferson Street, up Polk Street to North Point Street and through Fort Mason onto Marina Boulevard

· Streets will re-open through the Fisherman’s Wharf area by 10 a.m.

· From Marina Boulevard, runners will enter the Presidio and come out via El Camino de Mar to 32nd Avenue to Clement Street to 45th Avenue to Point Lobos and out to the Great Highway

· The runners will then enter Golden Gate Park

· The Great Highway from Point Lobos to Fulton Street will re-open by 11 a.m.

· Once back on the Great Highway from Martin Luther King Way, runners will head south to Skyline Boulevard, turn left and circle Lake Merced. Then, continue north on The Great Highway

· The Great Highway from Fulton to Lincoln will be re-opened by 4:00 p.m.

At all times, there will be local access for residents throughout the course.

The following Muni routes and lines will be affected:

The only Muni re-routes will be in the Union Square area from 4 to 10 a.m., Sunday; however, there may be some delays at other locations on the course.

No Muni service will be affected.

Fiesta on the Hill

On Sunday the 23rd annual Fiesta on the Hill Bernal Heights’ Street Fair will be held from 10 a.m. to 6 p.m.

The following street closures will be required from 5 a.m. to 10 p.m.:

The 24 Divisadero Muni route will be affected.

The following street closures will be required from 6 a.m. to 10 p.m.:

Heavy ridership is expected on the following Muni bus line and route: