J Church Street Level Service
· J Line trains will operate between the street closure and Balboa Park Station.
· The first outbound stop will be at Church and 18th streets.
· The last inbound stop will be at Church and 16th streets. Customers can continue downtown by transferring to inbound subway service.
· Accessible service for customers with disabilities will be provided by the J Church Supplemental Shuttle Bus. The northbound Shuttle will depart from 16th and Church streets. The next stop will be at Market and Church. The southbound Shuttle will start from the temporary stop on Market and Church streets and stop at 18th Street.

22 Fillmore
· The detour of the 22 Fillmore will only affect the outbound service.
· Outbound bus service traveling to 3rd and 20th streets will be rerouted west
on Market Street from Church Street, south on Sanchez Street, east on 16th Street and back to its regular route.
· The outbound stop at Church and 16th streets will be temporarily moved from the northwest corner to the southwest corner.
· Inbound bus service to Marina Boulevard and Bay Street will follow the regular 22 Fillmore routes.

Other Service
· There will be no changes to service on the F Market, K Ingleside, L Taraval, M Ocean View, T Third, N Judah, N Owl or the 37 Corbett.
· Extra S Shuttle trains will operate between Embarcadero and Castro stations.

Balboa Park Station Project
Beginning at 7 a.m., Saturday and continuing through next weekend, the SFMTA will be installing curb ramps and pedestrian countdown signalsat the intersection of Ocean Avenue and the northbound I-280 freewayon-ramp.

49 Van Ness-Mission
· The inbound (toward downtown) stop on Ocean Avenue at Balboa Park Station will be moved to a temporary stop on the west side of the freeway overpass.
· Signs will be in place to direct customers to the temporary bus stop.

Cal Golden Bears Football Game
On Saturday the Cal Bears will play a football game against Utah atAT&T Park. The game will begin at 4 p.m. Stadium will open at 2 p.m.

On Saturday Muni customers may purchase their fare in advance at the following locations during the time specified: 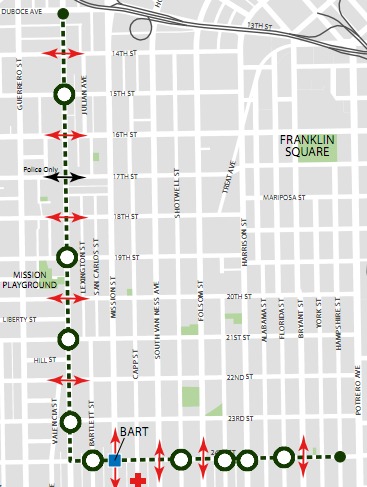 The route will be available for recreational activities from 11 a.m. to 4 p.m. The event is free to all participants.

Cross traffic will be allowed at: