The Sexual Manifesto: Everyone Knows Your Name…and What You Look Like Naked 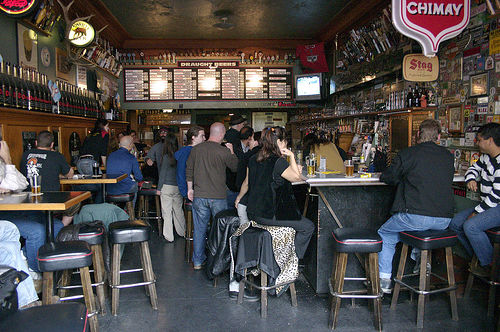 You can’t swing a tit around in this city without knocking your knockers into someone you previously dated. This is particularly true in the startup/tech scene, where failed startups breed new startups with incestuous rosters. Or even where someone knows someone who works at Apple or someone has seen that someone’s OkCupid profile. Or perhaps you bump into your exes at the zeitgeist bars…or just Zeitgeist itself.

This town isn’t big enough for the both of us…and the other 77 lovers in your past. Because we date within our hyperlocal comfort zone, we can’t avoid the occasional awkward small talk with someone who’s no longer licking your naughty bits. If you date enough in the city, it’s practically unavoidable. In fact, in some communities (read: lesbians, queers, kinksters), it’s preferable.

At some point, you’ll begin to map out distances with respect to apartments of previous partners. Oh, your bestie wants to meet at that new hipster cafe? That’s just around the corner from Jeff’s place! Better wear that new dress today…oh you know, just because. Depending on how many fizzled partnerings you’ve had, you could lead a pretty impressive city tour with your personal landmarks alone.

Some places become a de facto no man’s land, especially when you dated someone within walking distance of your own address. Bars and cafes that dot that old trade route are all suspect. Your ex could pop up at any one of them, and then the irony of finding (quite literally) common grounds with someone who previously told you that you had nothing in common will dawn on you. Of course, you will run into this old flame who has neither grown fat nor been laid off while you are in a depression-fueled aesthetic rebellion of patriarchal values that consists of sweats and greasy hair and the unintentional and unidentified sauce stain above your right boob.

It’s not like you can claim custody to a particular watering hole either. Heaven forbid that someone who never appreciated you anyway keeps you from your cherished selection of draft beer. You are a San Franciscan, damnit, and you will drink as you please in the best establishments in your neighborhood until you earn your banishment with an exhilarating story of drunken logic meets surly bartender to tell all your friends over brunch.

This is a fact of San Francisco life, and one that can only be embraced with a rousing “FML” post on Twitter or Facebook or the social medium of your choice. But don’t despair: your psyche will remain intact and you will survive–provided that you aren’t already hyperventilating in the claustrophobia of a Saturday night Mission bar.

…And that’s why people live in the Sunset.