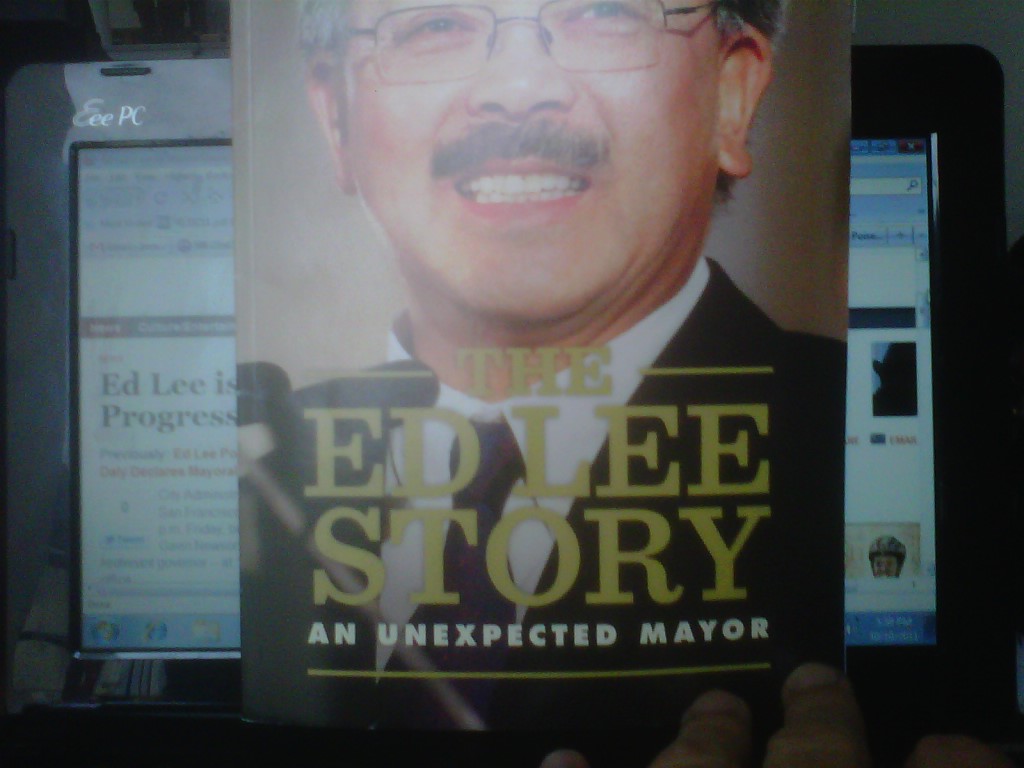 For politicians, television commercials and billboards aren’t always the best way to introduce themselves to voters. Newt Gingrich knows — he had a book (before he had the following 20). Heck, before he became president, Barack Obama had two.

So too, now, does Edwin M. Lee have 127 pages bound together by glue to ingratiate himself to voters: though “The Ed Lee Story: An Unexpected Mayor,” some of the 50,000 copies of which began dropping on voters’ doorsteps Saturday was not written by the city’s chief executive — and indeed, by law, the mayor had nothing to do with it.

The book is the undertaking of an independent expenditure committee called SF Neighbor Alliance for Ed Lee For Mayor 2011. This particular IE — the monetary backers of which are unknown at this time, with donations coming after the most recent disclosure period — is unique in that it has rented office space, in an old furniture store on the 1600 block of Market Street (on the same ultra-political block occupied by the plumbers’ union hall and Chris Daly’s bar, for those keeping score), when most IEs use little more than a post office box from which to send out mass-mailers.

SF Neighbor Alliance for Ed Lee for Mayor 2011 also features a face familiar to political wonks this election cycle: political consultant Enrique Pearce, the main man behind the Run, Ed, Run effort that was accused and cleared of ethics violations, is coordinating the IE, of which the book is only the beginning, Pearce told The Appeal on Monday.

“Ed Lee has a very compelling story,” said Pearce, noting Lee’s childhood in public housing, his mother working as a seamstress to raise six children, his first date with his wife in Hong Kong (at a McDonald’s).

“Ed is a pretty modest guy when it comes down to it — he’s not the kind of person who’d be spouting off all of this stuff. We thought the book would be a great vehicle. This kind of stuff doesn’t lend itself terribly well to a billboard.”

What’s in the book that hasn’t been in print and on the airwaves nonstop since January? By law, very little: since a candidate cannot participate or be otherwise involved in IE activity, Pearce and the Left Coast Communications staffers who worked on the book did not interview Lee, relying instead on an address Lee gave to the Commonwealth Club in May as well as media reports.

But here are some choice nuggets.

Ed Lee is cheap.
“I’m sure if he [hadn’t become] an attorney he wouldn’t own a tie,” Chinatown Community Development executive director Gordon Chin is quoted as saying. Perhaps a mean dig to get in on someone whose meager upbringing was a focal point of the tome, but Rose Pak gets in on it, too. “He always seemed to be in a rumpled suit,” quoth the Pak, who adds the anecdote of a pair of battered shoes Lee had in college and wore through his days at the Asian Law Caucus. “He might still have them in the house,” Pak says.

Ed Lee is a total badass.
Ed Lee organized the city’s first public housing rent strike at the Ping Yuen housing projects in Chinatown, and he was one of the attorneys for the plaintiff when the Black Firefighters’ Association sued in federal court for full integration of the San Francisco Fire Department. Pretty cool.

Ed Lee used to be funny.
But being mayor made him less so. “He was always smiling, cracking jokes,” the book quotes Lee’s godchildren as saying. But now that he’s mayor, “he’s more somber, more serious.”

Ed Lee might need an apologist.
“Isn’t it possible that changing one’s mind can be a sign of integrity, rather than its opposite?” the book muses. “Couldn’t it mean a reexamination and adjustment of assumptions? Perhaps initially Lee hadn’t seen himself as Mayor material, but after real time in office, he knew better.”

Perhaps it’s not Pulitzer-worthy. “At the end of the day it’s an instabook — it was written in a very compressed time frame,” Pearce said. But it’s also only the beginning, he added. The IE has an office because there’s “200 volunteers” working out of it, and the book may be followed by tomes in other languages as well as more traditional mailers and doorhangers.

Tony Winnicker, spokesman for the official Ed Lee campaign, said he hadn’t seen the book but is eager to do so. Representatives for Lee’s opponents said that the book fits perfectly into the Ed Lee Machine narrative.

“When he decided to run, he walked into this infrastructure already built for him,” one said, repeating the hearsay that Rose Pak once said Ed Lee would never have to pick up the phone and ask for a contribution.

Nor, it appears, a printer.