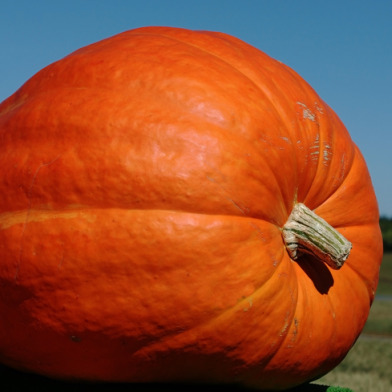 9:21 PM: History was made in Half Moon Bay today with a record-setting pumpkin.

This is the third competition Urena, 42, has entered this year. He finished first at the Elk Grove pumpkin weigh-off on Oct. 1 and second at the Uesugi Farms Pumpkin Park in Morgan Hill on Saturday.

Participants must use different pumpkins for each competition, Urena said.

His daughter, Liliana, made the trip with Urena to Half Moon Bay. “She hugged me and cried with me,” Urena said. “That’s the best experience we’ve ever had.”

Urena will receive a $6-per-pound prize for his pumpkin, totaling $10,224 in prize money, plus a $1,000 prize for having grown the heaviest pumpkin in the state of California, Beeman said.

Brant Bordsen of Marysville came in second place at 1,693 pounds. Jim Mathison of Napa had his pumpkin finish in third at 1,554 pounds. Napa’s J. Hawkley came in fourth place at 1,548 pounds.

The Great Pumpkin Commonwealth honored Urena as the Grower of the Year. His three pumpkins totaled 4,949 pounds.

The giant pumpkin will be on display with the four other heaviest pumpkins this weekend at the 41st annual Half Moon Bay Art and Pumpkin Festival, Beeman said.

Urena will also be in Half Moon Bay for the festival on the 15th and 16th.

12:18 PM: A winner has been announced after a morning-long pumpkin weigh-off at the Half Moon Bay Pumpkin Festival.

Urena will receive a $6-per-pound prize for his pumpkin, totaling $10,224 in prize money, plus a $1,000 prize for having grown the heaviest pumpkin in the state of California, Beeman said.

The giant pumpkin will be on display with the four other heaviest pumpkins this weekend at the 41st annual Half Moon Bay Art and Pumpkin Festival.

5:34 AM: Bay Area pumpkin growers will compete this morning for thousands of dollars in prizes at the 38th Annual Safeway World Championship Pumpkin Weigh-Off in Half Moon Bay.

Growers will start weighing their massive pumpkins at 7 a.m. at the I.D.E.S. Grounds at 735 Main St., and one lucky grower could take home a $5,000 mega-prize if they can manage to break the world record for biggest pumpkin.

The world record stands at 1,810.5 pounds, set by Chris Stevens of New Richmond, Wis. At last year’s Half Moon Bay event, the winning pumpkin from Ron Root of Citrus Heights came up short at 1,535 pounds.

But this year organizers believe based on height and circumference that Santa Rosa grower Russ Pugh’s pumpkin may stand a chance of taking home the mega-prize.

Even if the pumpkin isn’t record-breaking, the winner of the event will not go home empty-handed. The biggest pumpkin will fetch a prize of $6 per pound–possibly over $10,000 — and prizes will be awarded for second through 10th place.

There will even be a $500 prize for most beautiful pumpkin, judged by the audience based on color, shape and size.

The pumpkin weigh-off is just the beginning of the Half Moon Bay Art and Pumpkin Festival this weekend on Oct. 15 and 16.

The enormous pumpkins will be back for that event, along with three stages of entertainment, a Great Pumpkin Parade, a haunted house, and pumpkin carver Farmer Mike sculpting a pumpkin that weighs over 1,200 pounds.