On the Road: Real Estate, Dan Deacon, The National and Others

It’s fitting that the best track on Real Estate’s recent release, Days, should be titled “Out of Tune,” as the album was discordant enough to induce physical discomfort throughout my first listen. The discordance is certainly not internal; in that regard, Days is one of the most maddeningly in-tune records I have heard in some time, its clean, crisply strummed riffs all merging into a single, utterly coherent flow. Rather, the clash here is with the pace of modern life, and the cresting conventions for musically articulating it.

Unwaveringly mid-tempo, the songs are coiled just tightly enough to dip their toes into a pool of dreamy languor without making the expected dive. Starched clean with the exception of barely-there echo and reverb, the melodies gently evoke 60s pop but deny the blatant caricature that, once again, we’ve been conditioned to expect. The startling absence of any bold sonic gestures becomes the work’s bold gesture.

What Real Estate gifts us here is a recollection of the past – a world charted in miles, not kilobytes – that is pleasant enough to awaken nostalgia, detached and unromantic enough not to satisfy it. “All those wasted miles/ all those aimless drives through green aisles/ a careless lifestyle – it was not so unwise,” mildly muses guitarist Martin Courtney in “Green Aisles.” Persistently frustrating the desire for blown-up nostalgia and pop swagger, and looking mighty refined while doing it, Days is enough to fill a first-time listener with churning rage. Always a good sign.

While, in remaining staunchly above the fray, Real Estate stands to reveal quite a lot about the more retro-happy, high-fructose fare the indie community has been ingesting lately, the lack of salient standouts on Days works against its staying power. If you’re looking for an aesthetically cohesive array of defiantly timeless pop, though, Real Estate should make for a superb show. 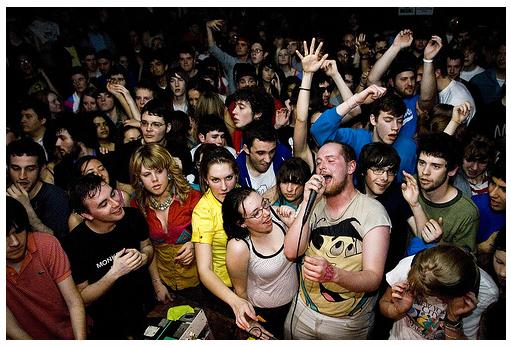 Dan Deacon is a master of silliness and sonic building (among other things). A typical Deacon moment arrives ten minutes into Spiderman of the Rings‘ epic centerpiece, “Wham City,” when, after accreting layer, after layer, after layer of tweaked out blips, ecstatic chants and melodies designed to hit all the electro-pop sweet spots, he suddenly strips away everything but the one component that you maybe noticed, but didn’t really process: a storybook-like verse brimming with childlike mania and zeal (“out of the fountain flows gold, into a huge hand/ that hand is held by a bear who had a sick band/ of ghosts and cats/ and pigs and bats/ with brooms and bats/ and wigs and rats …” etc.)

This goofy exuberance is a welcome presence in the world of electronic music – a place overwhelmingly given to the melancholy, the adults-only, and, especially, the cool. If there’s one thing Dan Deacon is not – and album titles like Spiderman of the Rings, a fusion of two pronouncedly geeky pop culture obsessions, should be a clue here – it’s cool.

Deacon is remarkably gifted at transferring his goofball giddiness to his audience in the live setting, usually accompanying them on the ground level. A few minutes of Bromst‘s raving melodies and chipmunk-voice loops, and the most poised audience will succumb to the artist’s rather explicit leave-your-composure-at-the-door crowd participation policy. From there, it’s a dorktastic romp of human tunnels, dance-offs – everything short of the hokey pokey (to date), all orchestrated by the weirdo-wizard himself. 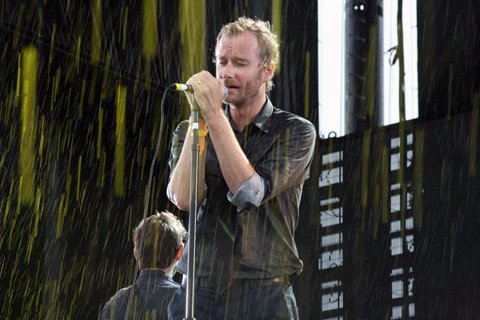 When The National released Boxer in 2007, I didn’t see what the fuss was about. They seemed the subdued counterpart to so many more gripping bands – a The Walkmen without the raffishness, an Interpol without the bite, an Arcade Fire without the pyrotechnics. Their music never popped in the way I wanted it to; Matt Berninger’s doleful baritone struck no chord with me. In a word, they were old.

A one-two metaphor like “sorrow’s my body on the waves/ sorrow’s a girl inside my cave” in “Sorrow,” or the economically provocative imagery in “Bloodbuzz Ohio,” “stand up straight at the foot of your love/ I lift my shirt up,” followed by the strangely shocking request, “Lay my head on the hood of your car,” are enough to keep the listener in utter anticipation of just what he’s going to say next.

Then, bless them, are the deft articulations of the times we live in. “I still owe money to the money to the money I owe/ the floors are falling out from everybody I know,” Berninger sings in “Bloodbuzz Ohio.” It makes for interesting contrast with the Bush-era Boxer‘s opening track, “Fake Empire”: “Tiptoe through our shiny city/ with our diamond slippers on/ do our gay ballet on ice/ bluebirds on our shoulders/ we’re half-awake in a fake empire.”

Actually, the excellent High Violet is in many ways more subdued than Boxer. Guitar, piano, strings and backing vocals tend to hang behind Berninger like a simply embroidered tapestry. The tracks rarely match the tempo or energy of “Mistaken For Strangers” or “Apartment Story,” and certainly never surpass. I have also yet to find in High Violet a line quite as good as “Mistaken For Strangers'” “surpise, surprise, they wouldn’t wanna watch/ another uninnocent, elegant fall into the unmagnificent lives of adults.”

But hey, that’s the beauty of concerts: the band draws from various albums in putting together a good show. The National, I think, is definitely a show you should go to.