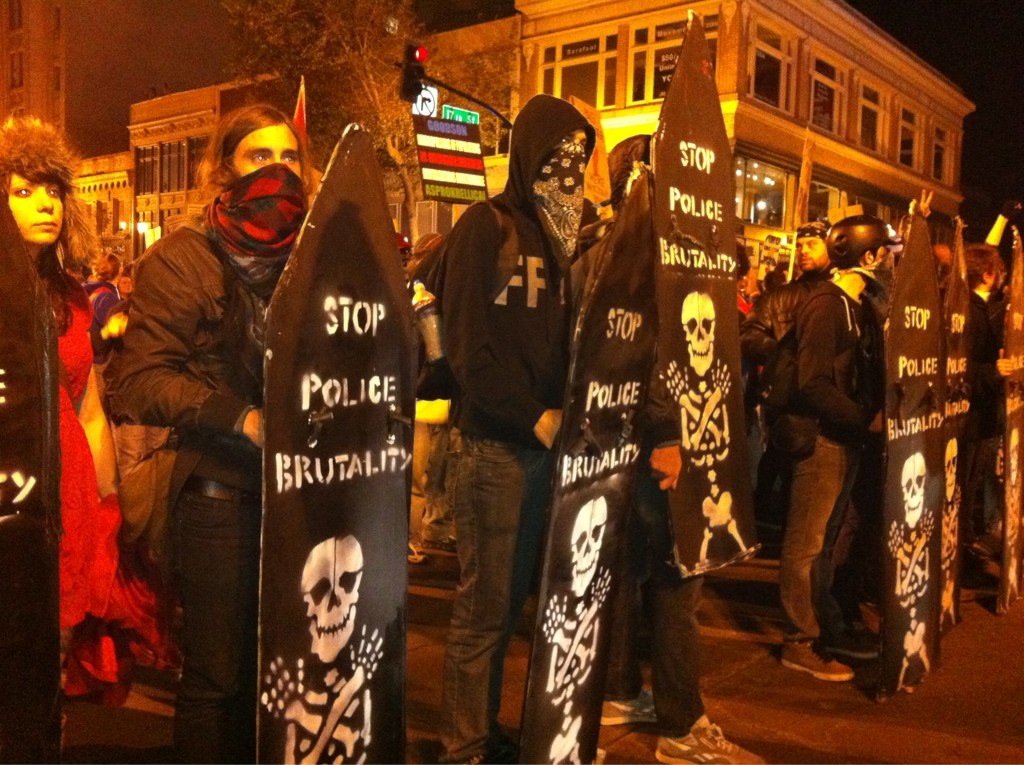 “Occupy Oakland” demonstrators had a mostly peaceful march through downtown and West Oakland neighborhoods Saturday night, though some reports on Twitter reported confrontations with police and vandalism of a police recruiting station.

The theme of tonight’s march, in addition to the cause of economic and political disenfranchisement that has defined the “Occupy” movement, was against police brutality, in light of this week’s clashes with police in Oakland involving tear gas and reports of arrests at “Occupy Denver” earlier Saturday.

The march started around 9 p.m. from Frank Ogawa Plaza, where the Occupy Oakland encampment has been partially rebuilt following a raid on protesters early Tuesday morning.

Some lines of protesters came equipped with plastic shields that said “Stop Police Brutality” and were painted with pictures of skeletons. Others marched in Halloween costumes, according to photos posted to Twitter.

A window of a police recruiting station near Frank Ogawa Plaza was smashed at some point during the march, according to photos from the scene.

There were also brief confrontations with police as protesters tried to march toward the police station at 7th and Washington streets downtown, and again as the crowd made its way past Interstate Highway 980 in West Oakland.

As of midnight, it was not clear if police made any arrests during the demonstrations. The march ended back at Frank Ogawa Plaza shortly before midnight. Protesters have been ramping up demonstrations and outreach in preparation for a general strike called for Nov. 2.