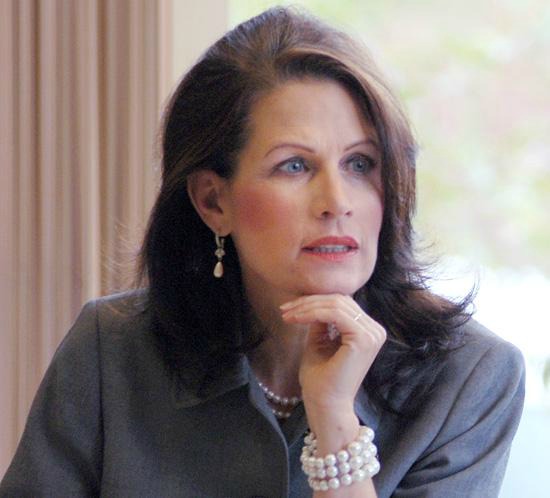 U.S. Rep. Michele Bachmann, a Republican candidate for president in 2012, made a speaking appearance in San Francisco today, expounding on the theme that America thrives when its government stays out of the way of its businesses.

The Minnesota congresswoman spoke for about 30 minutes at San Francisco’s Commonwealth Club on domestic and foreign policy, then fielded questions from the audience on a variety of topics, both political and personal.

Bachmann said the U.S. used to lead the world in innovation, and “San Francisco has been the hub of much of that innovation,” she said.

However, job growth around the country has been stymied by what she called the “anti-business policies” of the Obama administration, citing the closure of the Solyndra plant in nearby Fremont.

Bachmann said the U.S. Department of Energy’s $535 million loan guarantee to the company, which announced in August it was filing for bankruptcy, was an example of “when government gets in the business of blindly choosing winners and losers.”

She said, “It’s our cash for the government’s clunkers.”

She said as president, she would overhaul the country’s tax structure, including establishing a corporate tax rate among the lowest in the world.

Bachmann also discussed the news that Moammar Gaddafi had been killed in Libya, saying “the world is a better place without Gaddafi,” but hoped his death will signal the end of American military involvement in that country.

During the question-and-answer portion of the event, Bachmann, seen as a leader of the conservative-minded Tea Party movement, answered questions about the “Occupy Wall Street” movement in New York City that has spread around the country, including in San Francisco, Oakland and elsewhere in the Bay Area.

She said she saw the two movements as diametrically opposed on how to solve the problems of the country.

While the Tea Party has pushed for “permanent solutions driven by the private sector,” the other movement is pushing for “government-directed solutions … and that hasn’t worked,” Bachmann said.

Plus, she said, “the Tea Party picks up its trash afterward,” a dig at Occupy Wall Street protesters and their brethren around the nation.

Although Occupy protesters rallied last week outside the San Francisco appearance of another high-profile conservative, Rupert Murdoch, none were seen at Bachmann’s event, which was attended by an older-skewing crowd that was mostly supportive of the congresswoman.

Near the end of the event, Bachmann answered questions about the experience of having 28 children, 23 of which are foster children.

She joked, “You’re looking at the old woman in the shoe right here.”

Bachmann, who is visiting California after a Republican presidential debate in Nevada earlier this week, is scheduled to attend private fundraisers in the Bay Area later today and Friday before heading to Iowa this weekend, campaign spokeswoman Alice Stewart said.