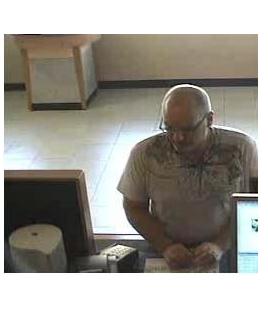 The suspect has been linked to 12 bank robberies throughout California, one of the most recent of which was in the Bay Area, according to the FBI.

The most recent heist, on Oct. 8, was reported at a bank in Thousand Oaks in Ventura County. He has also been linked to six bank robberies in San Diego and one in Camarillo.

Law enforcement officials believe the suspect frequently travels long distances throughout the state and may be recognized at motels or gas stations.

The bandit has been described as a white man in his 40s, weighing about 200 pounds with a medium build. He is bald, with short dirty blond hair and wears prescription glasses. He makes no attempt to disguise himself, according to the FBI.

The suspect uses a note to demand cash from tellers and, in some instances, has even thanked his victims, law officials said.

He has a calm demeanor and does not appear rushed or nervous when he leaves the scene of the crime, according to law enforcement officials.