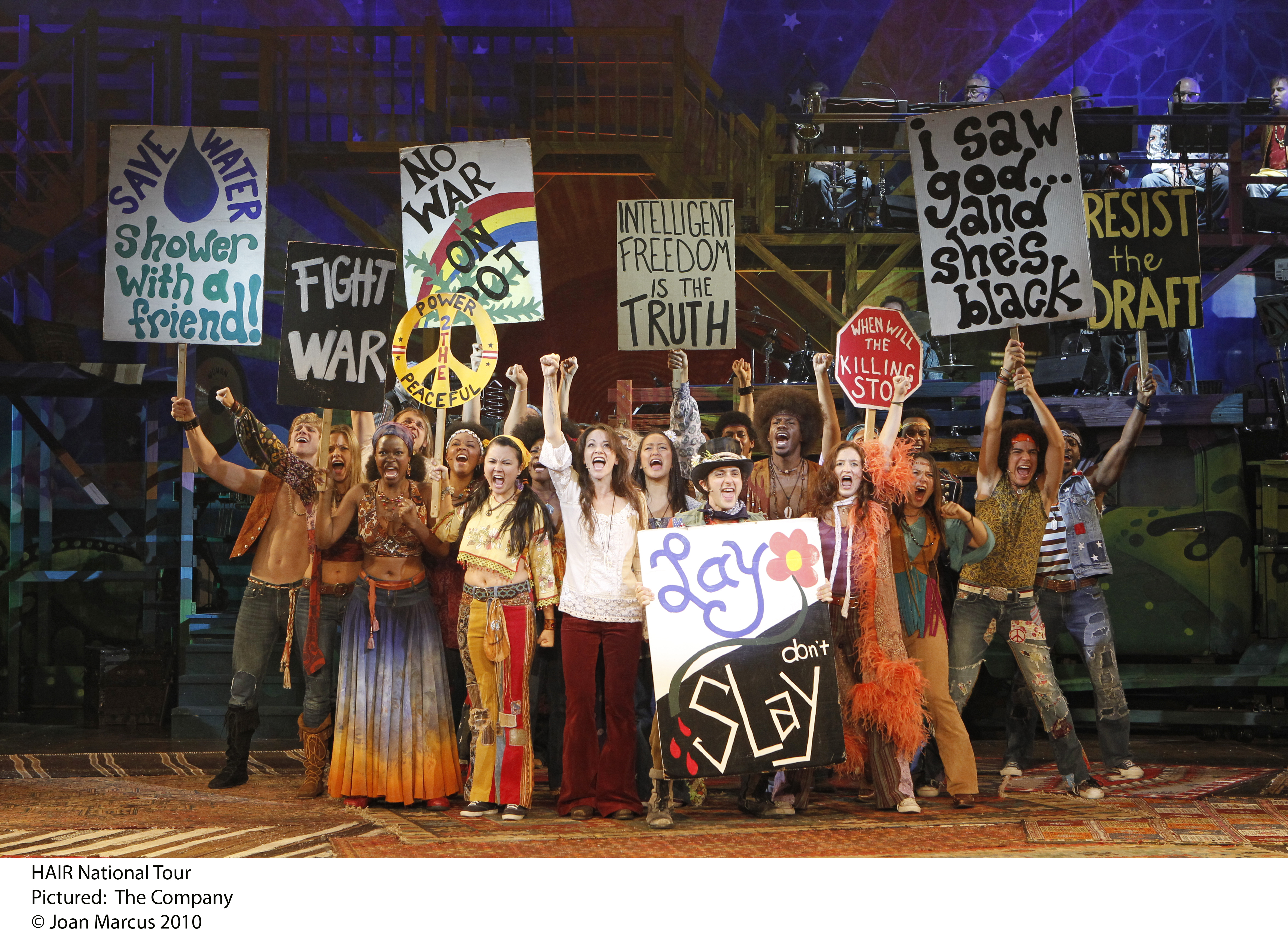 Why revive Hair, yet again? Its plot is stick-thin, even by musical standards (to summarize: hippie Claude gets drafted; vague worry and discomfiture, interspersed with rollicking hippy antics, ensue). Its aspiration is a grand, unadulterated tour of 60s counterculture – a subject that, while shocking and misunderstood at the time of the work’s conception, is nowadays perfectly antiquated, even banal.

The SHN production more or less hits the mark in all of these areas. Stuffy theatrical conventions be damned, the actors frequently take to the aisles (if you’re wearing a ponytail in one of these seats, prepare to be freed) and, ultimately, the audience takes to the stage for a communal dance party (relive the experience online the next day!) The only truly noteworthy exception is Scott Pask’s scenic design, which, consisting of a rusted jalopy and some janky wooden scaffolding to support the band, is as lackluster as it is inappropriate, given the story’s New York City setting.

Indeed, much of the musical’s content amounts to a patchwork of social grievances that remain unfortunately relevant today – for instance, with an unchecked military industrial complex, imperialist foreign policy, racism and other forms of gross inequality, environmental degradation, and a misguided drug war, to name a few.

While modern activists may have ditched the astrology and generally incoherent mysticism that came to define their flower power forebears (and this play), the points of protest remain largely the same.

Also key to Hair‘s continuing tolerability, is that it resists simply glorifying the hippie movement. Ultimately, the members of the “tribe” seem as rightfully incensed and inspiringly progressive as they do tragically immature, so much of their radicalism rooted in naïveté and otherwise unsound bedrock.

“I don’t want to be a dentist, or a lawyer, or a bum, or an IBM Machine, or a rock-n-roll hero, or a movie star … I just want to have a lot of money,” Claude cries near the story’s end, reminding us that, though the actor is (somewhat distractingly) more advanced in years, his character is just a lost, high school kid.

Ultimately, though, all this exuberant showmanship, social relevance, even bodily exhibitionism prove unable to fully compensate for what is fundamentally an undernourished book – a story that drifts rather than propels itself.

As a result, the show slumps in its midsection, most acutely at the start of act 2, only to be finally rescued by the phenomenal acid trip scene. Bringing with it Vietnam combat hallucinations, a black female Abraham Lincoln (“emanci-mothafuckin-patin’ the slaves), Aretha Franklin and the Dalai Lama, this indulgent Dada sojourn elevates the musical’s most endearing qualities – humor, absurdity, irreverence and social critique – to their apices. After that, it’s worth sticking through what remains, if only for the dance party.

Hair plays at the Golden Gate Theater through November 20th.