Dance Flash: Take a Dance Tour of the TenderNob with Amy Lewis 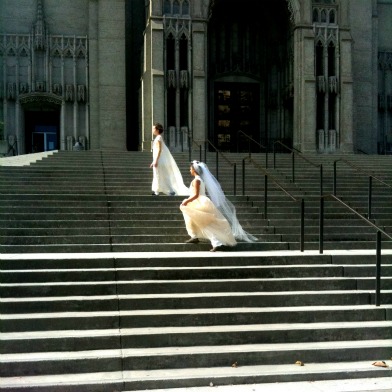 If you’re interested in San Francisco history or undecided on the term “microhood,” Amy Lewis‘ dance tour of the TenderNob might be right up your alley. The Meridian Gallery‘s been quite busy over the past two months, throwing an arts and performance-filled party called “House at 100” for its building at 535 Powell Street.

Lewis’ contribution is “Tread the Tendernob,” a dance tour of the public space around the Gallery, takes attendees up Nob Hill and then down to the Clift Hotel in the Tenderloin’s theater district. Lewis graciously gave me a little more insight into her work and this one-time-only tour that explores shelter, sin, and spirituality within the neighborhoods.

What: Amy Lewis’ “Tread the TenderNob”

Where: Meet at the Meridian Gallery, 535 Powell St @ Sutter St

Would you tell me a little bit about your collaboration with the Meridian Gallery? How did it come about?

The Meridian Gallery sent out an RFP for a choreographer-in-residence to make a piece for “House at 100,” the 100-year anniversary festival of the building in which the gallery is housed. I sent in a proposal describing a project I am currently working on that is in the beginning stages of conception. This project consists of walking tours in different San Francisco neighborhoods coupled with performances (in theaters or galleries) based on the history and architecture of the neighborhood in question. Dance Curators Michelle Lynch and Lindsay Levesque chose to work with Alexis Iammarino as a choreographer-in-residence, but asked me to create a “performed” walking tour for their festival.

Michelle Lynch is responsible for having the idea of a walking tour that is part performance-art. However, she gave me liberty to translate this idea into whatever form I chose. I have decided where the walking tour takes place, and what subjects to discuss. The Gallery has been extremely accommodating in letting me shape the tour; their only request is that it be close to sixty minutes (though I’m having a little trouble sticking to this time frame!)

Much of your work centers around everyday life. What drew you to Tenderloin/Nob Hill? And what kind of research did you undertake for the project?

I wanted the tour to be in neighborhoods that were close to the Gallery, to put the Gallery in context with the environment around it. Nob Hill and the Tenderloin are north and south of the gallery, respectively. I chose to walk in both neighborhoods because of the economic and culture difference between the two. The tour is intended to be a snapshot of San Francisco as a whole, and the cultural and economic diversity that is seen from neighborhood to neighborhood, or sometimes block to block.

I have done a fair amount of research for the project. I researched the history of both neighborhoods, the luxury hotels on California St. and who owned the land before they were built (the Big Four, James Flood, and James Fair), the SRO hotels in the Tenderloin (when they were built and who runs them now), San Francisco city policy on massage parlors, and a small amount of research on Grace Cathedral, the Fifth Church of Christ Scientist, and Glide. The research took the form of books, video, websites, and information at San Francisco History Center. The main focus of the research was to find out how people lived downtown (apartments, flats, single-family homes, hotels), both in the late 1800’s and now.

Dancing in public–not on stage, per se, but in spaces normally not thought of as movement space–Does it change the way you create or shape your work? How does public dance differ from dance on a “traditional” stage?

To be honest, this is my first site-specific work. Site-specific work as not been the focus of my career, but I am inspired by this piece and its challenges. That said, I have created work for galleries, warehouses, and small and large stages. The space always shapes the work; in my case, small space veers the work towards intimacy, and large space provides room for expansive movement. Unfortunately, I can’t answer your question on public dance, as this is my first experience with it. In addition, there is not much dancey dance on the tour, more moving figures. 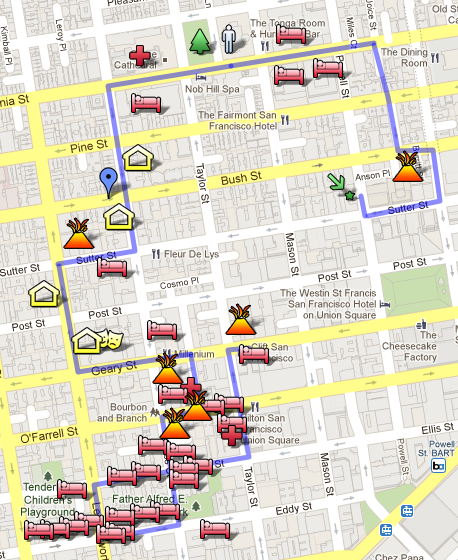 What should tour attendees (are they tourists?) expect on the walk? How does this whole dance-performance-walking tour thing work?

I know for sure that some of the attendees will be friends of the Meridian, myself, and the performers. I also anticipate that several people from the dance community will attend, both fellow artists and dance-lovers. I am hoping that actual tourists will attend, but at this point I’m not sure. Meridian Gallery may have more of an idea about whether or not tourists may come. I do know Michelle is hoping that people in the street will join the tour, if only for a few blocks.

I have had to decide how an actual performance walking tour works, as I don’t know of any others! Without giving too much away, I will tell you that the tour consists of a host (myself) delivering historical and present information on specific buildings of interest. The performers are placed throughout the tour, and they reference several of the subjects that I speak about. Some of the performers speak, but most merely move. AXIS dancers Rodney Bell and Sonsheree Giles show up in the Tenderloin, and are not to be missed.

And is this a solo dance or a group work?

This is a group work with 13 performers.

Will this weekend’s tour of “Tread the Tendernob” be a one-time-only performance? Or could it possibly encore at a later date?

This is a one-time only performance. I don’t anticipate an encore, but you never know!