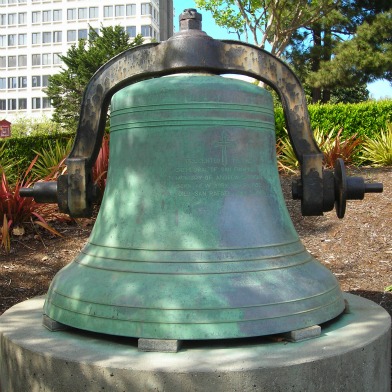 A historic bell was reported stolen from the garden at St. Mary’s Cathedral in San Francisco on Sunday morning, police said today.

The copper bell, which is about 4 feet tall, 5 feet wide and weighs several thousand pounds, was reported stolen by the manager of the church, located at 1111 Gough St., police spokesman Officer Albie Esparza said.

It was made in 1889 at a Baltimore foundry and shipped to San Francisco, where it survived the 1906 earthquake, as well as a fire that burned down the original St. Mary’s Cathedral on Van Ness Avenue in the 1960s, Danker said.

Property of the Archdiocese of San Francisco, the bell was moved in 1971 to the church’s new location, where it was put on display in the garden. Church officials had planned to hang it in the cathedral again but could never get the funding to do so, he said.

Although the theft was reported on Sunday, “nobody can swear on a stack of Bibles when they can last remember seeing it,” Danker said.

Investigators are searching for surveillance video that may have captured the theft, and are looking into whether the stolen bell is connected to other recent copper theft cases, including one at the nearby intersection of Gough and Turk streets where more than $25,000 in copper wiring was taken, Danker said.

Police are also notifying local junkyards and recycling centers where the bell could potentially turn up, he said.

Danker said the church is offering a “substantial” reward for the bell’s return.

“We’re just concerned about getting the artifact back,” he said.