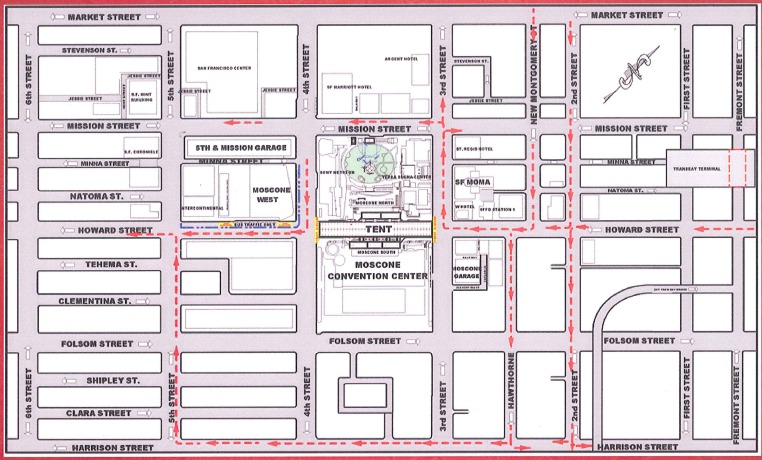 Oracle Open World
Oracle Open World will occur at the Moscone Center from Sunday, Oct. 2 through Thursday, Oct. 6. An attendance of 45,000 is expected. During this time, the Java One conference will be held at the Parc 55, San Francisco Hilton and the Hotel Nikko.

The following street closures will be required to accommodate this event:

Significant traffic congestion is anticipated in and around Moscone Center between 7 a.m. and 8 p.m. daily for the duration of the closure. Travelers are encouraged to take public transit or use alternate routes.

For those traveling westbound on Howard Street, the detour will direct traffic south on 2nd Street to Harrison Street.

For those traveling from north of Market on Montgomery, the detour will direct southbound traffic from New Montgomery, westbound on Howard, and south on Hawthorne to either Folsom or Harrison.

Mason Street traffic will detour west on Geary to south on Jones to east on Eddy and back to Mason.

There will be heavy pedestrian traffic in the area.

Detour signs and traffic message boards are installed along Howard Street and the detour routes. Caltrans has activated message signs on major freeways entering the City to notify motorists of the closure.

SFMTA Parking Control Officers and San Francisco Police Officers will be deployed at key intersections prior to and during the closure.

There will be heavy traffic in the area. Motorists are advised to allow extra travel time.

The Park streets in the immediate area will be closed. No city streets will require closures.

Concert patrons are encouraged to allow plenty of travel time. Gates will open at 10 a.m. before the first concert each day.

Heavy ridership is anticipated before and after the event, the SFMTA will provide additional Muni buses on the following line and routes:

The following are preferred boarding locations after the event:

The last vehicles will depart these locations at 8 p.m. each night.

There will be heavy traffic in the area. Motorists and transit riders are advised to allow extra travel time.

There will be no street closures and no Muni bus services will be affected.

During the partial closure, only one southbound traffic lane on the eastside of 1st Street will be open.

No Muni bus service will be affected.

The 71 Haight-Noriega Muni route will be affected.

Golden Gate Avenue between Jones and Leavenworth streets will be closed from 6 a.m. to 6 p.m.

The 5 Fulton Muni route will be affected.

The following street closures will be required from 4 a.m. to 10 p.m.:

Blessing of the Fishing Fleet
On Sunday the annual Blessing of the Fishing Fleet will begin with a procession at 2 p.m. from Saint Peter and Paul’s Church on Washington Square. The procession will proceed to Jefferson Street between Jones and Taylor streets via Columbus Avenue and Leavenworth Street for the blessing celebration at approximately 3 p.m.

The following street closures will be required from 8 a.m. to 4 p.m.:

· 8:30 – 11 a.m. Lincoln Boulevard from Halleck Avenue and Graham Street in the Presidio

· 9 – 10:30 a.m., Beach Street (westbound only) from Laguna Street to Buchanan Street, Marina Boulevard (most northern lane only) from Buchanan to the Marina Gate

Traffic will be re-routed around the run.