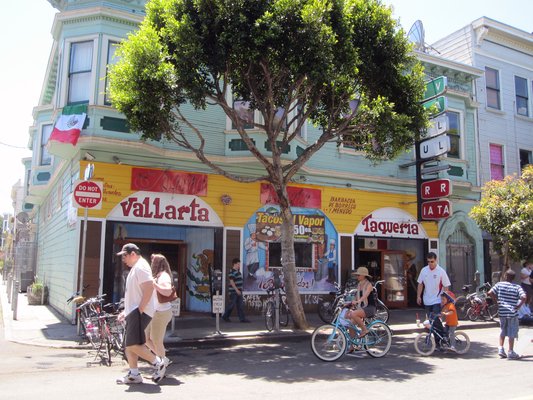 It appears a pair of diners were chowing down on their favorite Mission District Mexican food selections — the street-style tacos served until after 3 a.m. are particularly bomb, we hear — when they noticed something was afoot. Or rather, a-wing: there was a pigeon nest in the restaurant’s rafters, and pigeons flying in and out of the eatery via a hole in the roof, according to a complaint on file with DPH.

“There were pigeons flying in and out of the restaurant,” the unnamed resident said, according to the complaint. “The peigons [sic] were leaving peigon [sic] waste visibly around the restaurant.” (You can read the entire complaint here.)

That was on Sept. 6. On Sept. 8, a DPH inspector visited for a reinspection and ordered the restaurant immediately closed after finding six bags of trash in a storage closet and what was delicately described as a “cockroach infestation.” (You can read the inspector’s entire report here.)

This isn’t the first time Vallarta has had to close due to an excess in, shall we say, live animal culture: the eatery also had to close in 2006 thanks to a roach population.

All this will soon be taken care of, according to restaurant owner Juan Rosas Lopez, reached via telephone at the eatery on Tuesday.

“We’re closed to do renovations to the restuarant,” said Lopez, who, God bless him, talked to us after we exhausted our Spanish with repeated “periodico, noticias, noticias,” to one of his employees. “We’re fixing the walls, the bars, the counters,” Lopez said. “We’re doing something nice.”

Lopez says he’ll be able to reopen in a couple of days, pending results on the hearing.
Whatever problems he’s had doesn’t appear to have cut into his bottom line much — another Vallarta location recently opened on 16th Street, and the taqueria’s Yelp rating is a four out of five stars.

But the pigeons? That’s a new one. “‘Pigeon problems’ abound in this city and all cities throughout the US and the world,” observed DPH spokeswoman Eileen Shields.

“What doesn’t abound are pigeons taking up residence inside restaurants. Very unusual occurrence, even for San Francisco.”