On the Road: Gang Gang Dance, Zola Jesus and Others

Gang Gang Dance reward the musical connoisseur. Aptly described as “pan-cultural,” their compositions are veritable Great Barrier Reefs of eclectic influences – jazz, house techno and Punjabi pop, to name a few. People who can parse them all must see an album like Eye Contact in a spectrum far beyond the average listener’s capacity.

For those of us with slightly lower-resolution music palates, Gang Gang Dance produce a beautifully detailed and exotic flow, but one with limited sticking power.

This caveat may have something to do with how heavily GGD borrow their sounds from non-Western cultures and subcultures – in particular, ones where the tie between music and spirituality remains strong, but where song structure is markedly less tight than what the average Western listener is used to. It tends to come across as meandering and jam-oriented.

Eye Contact revels in its spiritual air, which surrounds subject matter here as well as sound. The florid, yawning 11-minute opener, “Glass Jar” (it doesn’t drop until 6 minutes in, but is worth the wait), is apparently dedicated to a friend who was killed by a bolt of lighting. It is one of many songs on the album exploring the phenomenon of death.

This is, after all, an album where the three interlude tracks are respectively titled “∞,” “∞ ∞” and “∞ ∞ ∞,” by a band that recently performed on the open seas during a solar eclipse.

Eye Contact also demands to be treated as an album – a single whole unit, rather than a collection of songs. As such, it is simply too big to cling in the way that a well-constructed individual song can. Rather, the work unfolds as one single odd and amazing flourish, then exits as suddenly as it came. It’s a laudable ambition, especially in an age where the iTunes single rules, but it could benefit from a calling card or two.

Of course, Eye Contact offers a number of outstanding moments – the mid-album, up-tempo track “MindKilla” contains a good measure of multiply peaking techno wizardry, and the appearance of Hot Chip’s Alexis Taylor on the soulful “Romance Layers” is a delight, his silky-smooth voice giving complement to (and providing relief from) Lizzi Bougatsos’ Eastern-inspired vocal gymnastics. They just don’t align with any of the ten titles into which the album happens to be divided.

2008’s Saint Dymphna, in contrast, produced a number of standalone nuggets in spite of being a generally holistic effort. The raging “First Communion” and the more softly textured “House Jam,” for instance, can easily hold their own on a playlist. The latter track in particular, a pop(-ish) bed of rolling, cut-and-pasted female vocals and piercing synth, produces a self-contained, somber yet blissful atmosphere that hovers at some remove from the rest of the album.

It will be interesting to see how these sensibilities – the emphasis on spirituality and the pursuit of a continuous whole – translate to a live performance. Gang Gang Dance’s reputation as a live act is certainly a good one, and not just under the astronomically epic circumstances of full solar eclipse. 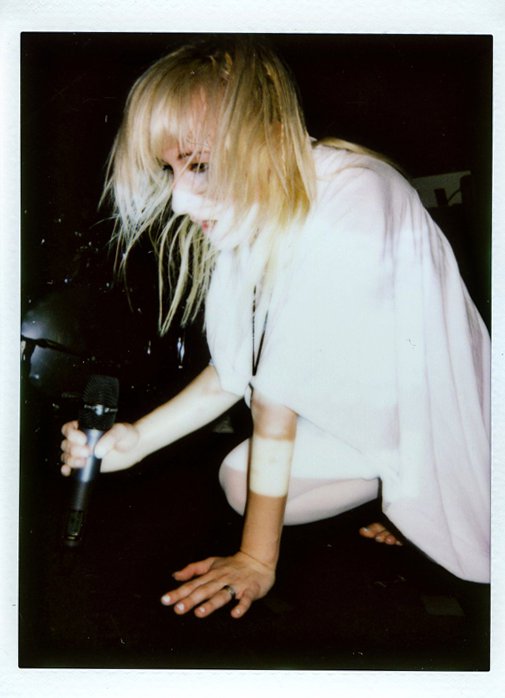 When an artist thrusts a term back into circulation as forcefully as Zola Jesus has “Goth,” it’s not a bad idea to pause and consider what we’re actually talking about.

Goth, in particular, is an interesting word. At this point it’s one that we just kind of get – a set of ideas (darkness, solitude, big emotions) that seem to stick together naturally, without need for a uniting definition. It’s a fairly ancient module in our cultural consciousness, after all, dating back to an 18th century genre of literature – one defined by the pleasing fusion of romance and horror, and a rejection of rationality and logic in favor of a murky, mysterious and emotion-centered view of the world.

In classic Gothic fashion, the songs are as dark as they are inviting; on Stridulum’s frigid winter night, Danilova draws you to the hearth. The imagery is inescapable: her songs are as often about giving in to the dark as they are about taking comfort in love (“It’s getting late/ It’s getting dark/ In the end of the night I can feel your warmth,” the album begins, ” “When the lights go out/ on us,” it ends).

Musically, the synths begin to brighten only on the album’s second-to-last song and major standout, “Sea Talk.” Lyrically, it is one of the most heartbreaking tracks. Just as the dawn breaks, it seems, the lover decides to leave. “Do you want a rain check/ cause I can’t give you what you need/ all by myself” Danilova sings.

Given how much Zola Jesus’ music stands apart from the rest (Tamaryn and Austra are doing good things with Goth too, but their respective muddling with shoegaze and electronica thins out an atmosphere that Zola Jesus leaves bravely intact), it is hardly surprising that 22-year-old Danilova was raised unusually, far removed from any cultural center.

Russian-blooded, Danilova grew up in the forest of Wisconsin. It was very cold there. Her father was a hunter (“He’d be out in the forest and bring back deer heads hoping that animals would eat the flesh and leave a skull,” she says). She was operatically trained (no surprise there), but routinely lost her voice due to stage fright; being Zola Jesus has helped with that.

Zola Jesus’ forthcoming LP, Conatus, does appear to dive into new sonic territory. Its first single, “Vessel,” toys with industrial sounds; its second, “Seekir,” chugs along with a danceability utterly alien to Stridulum II. Both, taken in conjunction with reports that Danilova is a mesmerizing performer (her stage fright is, apparently, long gone), point to an excellent live show.