On the Road: Cut Copy and St. Vincent at the Treasure Island Music Festival

2011 promises to be a very good year for the Treasure Island Music Festival. Day 1 offers a smorgasbord of electronic (loose application of the term) acts: Chromeo, Flying Lotus, Battles, YACHT, Geographer, among others – a sonic feast of decadent proportions, by any measure. Day 2 crams more high-profile indie fare into one day than I thought plausible: Death Cab, Explosions in the Sky, Beach House, The Hold Steady, Stephen Malkmus and the Jicks, Wild Beasts, Warpaint, The Antlers, Thee Oh Sees … and the list goes on.

In the interest of not overwhelming, below are two bands, one from each day. Each alone is reason enough to attend this festival.

Cut Copy are meant to be experienced live, or at least in a setting approximating that – with speakers of window-rattling wattage and enough sweat-slick, grinding bodies to generate a small current of electricity.

Unless you are on a stationary bike, or seriously into solo bedroom sock dancing (guilty, here), the point of Zonoscope‘s thumping, fifteen minute (and fairly repetitive) closer, “Sun God,” will probably be lost in your headphones.

Of course, when it comes to an electronic artist’s craft, perhaps the best measure of lasting quality is precisely what I just dismissed – its ability to hold its own in recorded form.

Cut Copy receive excellent marks here as well. It sounds silly to say that standouts from In Ghost Colours like “Lights and Music” and “Hearts on Fire” have “stood the test of time” (the album was released in 2008), but in an era bent on the condensation of information and the elimination of waiting, I think it’s safe to say that they have. While not all of the hour-long Zonoscope passes the headphone test, more than half of the tracks do, which is better than most albums can boast.

Zonoscope opens with its best track, “Need You Now,” which builds with a steady, compelling determination evocative of the genre’s progenitor, Kraftwerk. Upon casual listen, the song’s central expression, “I need you now,” seems loving, at least as innocent as the “I want to hold your hand”-style boyishness (which is, of course, not actually innocent) that Cut Copy typically exudes.

With closer listens, however, the song reveals a worrisome desperation that at times goes so far as to become threatening:

It’s a raving plea, clothed in one of the most glittering, fireworks-launching pop choruses of the last year.

With material like this, Cut Copy have dominated many a festival past. I have little doubt they will do the same at this year’s Treasure Island. 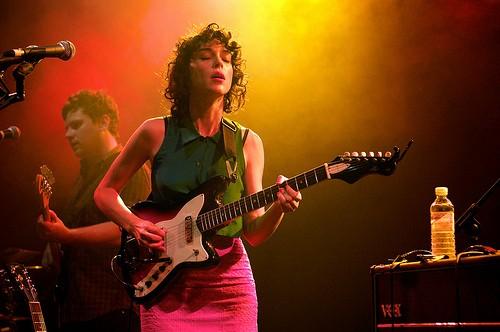 St. Vincent’s forthcoming third full-length, Strange Mercy (stream it in its entirety here on NPR), strikes me as the work of a severely type-A person. Each song is a meticulously built sonic landscape, as varied and peculiar as it is restrained – every synthesized blurp, sticky distortion guitar fill and pattering snare in its exactly right place.

The grandest of these addresses the painful, frightening, and at times infuriating process of adjusting expectations with regard to the life America has to offer, particularly to an artist. In “Cheerleader,” Annie Clark (the woman behind the St. Vincent moniker) sings “I’ve seen honest thieves/ I call family/ I’ve seen America/ with no clothes on/ But I/ don’t want to be your cheerleader/ no more.” Compare this to her more resigned attitude in the subsequent “Champagne Year”: “I make a living/ telling people what they want to hear/ It’s not a living/ but it’s enough to keep the cobwebs clear/ it’s not a perfect plan/ but it’s the one we got”; and finally her plea in album ender “Year of the Tiger”: “Oh America, can I owe you one?”

In this way Annie Clark is an artist’s artist with great appeal for the analytically minded (take it from me). We (analytics) love St. Vincent for the same reason we love ultra-tight, experimental pop outfit The Dirty Projectors, and Strange Mercy launches her safely into their league.

However, there’s another reason we love music – perhaps a more important one – that is not so much appreciated as immediately felt. That emotional punch, the capacity to send chills down a listener’s spine, remains entirely absent from St. Vincent’s work.

The songs are ostensibly very personal, or soul bearing (“did you ever really stare at me/ like I stared at you?” Clark reflects in “Neutered Fruit”). Yet, compare any one of them to, say, “Maps” by Yeah Yeah Yeahs – a band with a fairly comparable aesthetic – and St. Vincent feels distant, removed.

Maybe this is delivering on the mannequinesque, ghost-has-left-the-machine image that Clark (who is perhaps too gorgeous not to be a fembot, after all) assumes in her poses.

Much of it has to do with Clark’s singing style. While technically proficient and very pretty, her vocals, in particular her falsetto, are often as wafer-thin.During live performances, she seems to expend a great deal of effort in the management of her voice, wielding it more like an outside instrument than a native bodily function (this is, actually, very intriguing to watch). Indeed, she handles her guitar more naturally.

This brings me back to the pros about St. Vincent. Number one: Annie Clark shreds. Her albums are generously adorned with icky, sticky-distorted guitar fills and solos – sick, in numerous senses of the word (“The Strangers,” “Surgeon”).

For another, when Clark’s songwriting doesn’t feel ultra-calculated (granted, this is rare), it can give way to the kind of emotional atmosphere that we usually look for in a song. The best case of this on Strange Mercy is the titular track. Runners up are “Champagne Year” and “Year of the Tiger.” “Northern Lights” and single “Cruel” are fun too, though the latter comes dangerously close to being ruined by the sterilizing feel of perfectionism.

While St. Vincent misses the mark in certain ways – ones that some people will deem more critical than others – Clark’s music consistently sets itself apart through its superlative ambition, displays of technical talent and beauty.

I’ll bet she will be one of Treasure Island Day 2’s shining performances; possibly the day’s biggest draw, at least in my book.