NYC Trip Earns David Chiu $10,000 As All Mayoral Candidates Fundraise Near and Far 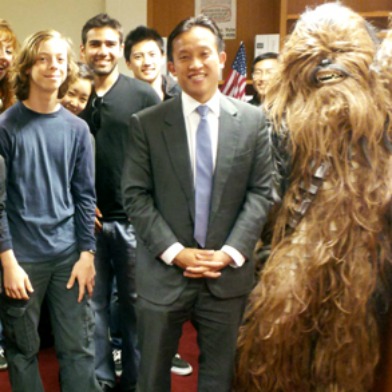 “While I was there, I thought I’d use my time wisely,” said Chiu, who hosted fundraisers on Aug. 19 at a luxury high-rise condominium complex near Times Square, and on Aug. 20 at an Upper Manhattan restaurant near Columbia University (one of which briefly drew former Chiu roommate and current Board colleague Jane Kim, a native New Yorker, back to her home burgh for a spell).

That — and the speech he delivered on immigrant rights at an event called Democracy for All — were the highlights of his brief, 36 hour visit. And the “$10,000” or so dollars Chiu received “from school, the civil rights community, the Asian American community and the tech and lawyer world,” as he put it.

Chiu is hardly alone in drawing money to his campaign war chest from all over California, and all over the country: while most campaigns boast of raising 70 percent or more of their financing from San Franciscans, nearly all are still raising money all over the country, hosting fundraisers in Chicago, Washington, DC and — we’re told — even Texas.

Exact totals are as of yet unclear, buried in piles of PDF forms at the Ethics Commission, and exactly what all candidates have raised since June 30 is not due to be reported for another few months (seriously: you want to spend hours crunching the data? Go ahead).

But former Congressional aide Bevan Dufty, for example, recently raised $25,000 in Washington, DC, from well-wishers involved with the Victory Fund, which benefits LGBT candidates. And that’s only one of the seven cities in which Dufty has raised money, according to his campaign.

“Bevan, as the only gay [sic] democrat, is on the brink of history and this is a milestone for the Gay [sic] community,” wrote Roby Chavez, Dufty’s communications director, in an e-mail.

“These are not people who are looking to do business with the city… People are supporting Bevan to advance LGBT rights and Bevan is honored by that.”

Dennis Herrera’s well-wishers include advertising executives, a CEO from Archie Comics, and baking executives in Chicago. As of June 30, he had raised at least $7,500 from New Yorkers alone, according to reports. A spokeswoman from Herrera’s campaign did not return an e-mail seeking comment.

As a venture capitalist, Joanna Rees is admittedly adept at raising money; some of her early benefactors included prominent citizens of Chicago, including Chicago Bears head coach Lovie Smith.

But one fundraiser in New York City, is Rees’s only dollar-diving trip outside of California, according to campaign manager Nick Panagopoulos.

“She was [in New York] because she is on the board of Endeavor, a non-profit that supports high-impact entrepreneurs in developing nations,” said Panagopoulos, who added that Rees, unlike every candidate save Mayor Ed Lee and public defender Jeff Adachi, has accepted the voluntary spending limits that came along with public financing.

And consider: thanks to public financing, the biggest contributor of cash to the mayoral campaigns will always be San Francisco taxpayers, whether they like it or not.