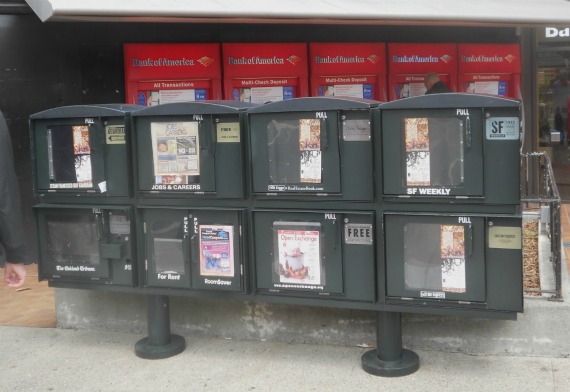 Nobody needs to tell you that the traditional news industry continues its drawn-out suffering, and that fewer and fewer publications are peddling in print. Nobody needs to tell this to the Department of Public Works, the agency responsible for the city’s 1,000-odd news racks, which, to some, serve little more purpose than graffiti magnets and storage lockers for street folk.

in 2009 DPW began replacing the once-copious free-standing news racks with the large, green rectangular “pedestal”-style news racks, like the ones found on Castro Street near the Castro Muni stop 18th Street.

These racks in particular, according to veteran LGBT blogger and Castro denizen Michael Petrelis, were recently removed, but they will be replaced despite being nearly always empty.

In fact, it appears the racks must always stay, whether they’re empty or not. For that, we may — at least partially — blame Thomas Jefferson.

DPW recently removed the Castro pedestal racks for maintenance, and will replace them without public input and despite at least some public opposition, Petrelis writes.

“There is no reason for DPW to return two superfluous pieces of street furniture to the narrow sidewalk fronting the BofA plaza on Castro Street,” Petrelis wrote in an e-mail (on which the Appeal was ccd) to DPW staffer Grace Moore, the lead person for news racks. In the case of the Castro racks, two out of the 16 racks are vacant, Moore acknowledged in a response.

It’s not just Petrelis, who’s frustrated with the pedestals. Castro merchants have in the past tried to get news racks moved or removed, but to no avail.

“They’re empty all the time,” says Andrea Aiello, who heads up the Castro Business Improvement District. The pedestal-style racks are preferable to the old, free-standing racks, “but it’s still problematic — with news online, so many of them are empty,” Aiello added. “It’s not a new issue.”

The news racks aren’t actually the city’s problem — they’ve been contracted out to Clear Channel for $200,000 a year, according to DPW spokeswoman Gloria Chan.

Publishers, in turn, can rent out news rack space for $50 a year, or less than the cost of a subscription to most newspapers. And choosing to remove them or not isn’t the city’s problem, either, or even the city’s choice — it’s the United States Constitution’s choice, Chan told the Appeal.

“[Newspaper and magazine] publishers have a First Amendment right,” she noted, and even if a news rack is filled only once a week or once a month, that rack is necessary to fulfill a publication’s right to disseminate information.

Exactly how many news racks are present in San Francisco isn’t exactly known, nor is it known how many of these racks are not rented and stay empty 100 percent of the time. A full report on news racks as well as the status of the contract with Clear Channel is due “sometime in the fall,” according to Chan.

What is certain is that more news racks are coming — large, green “pedestal-style” news racks will be added to on Clement Street in the Richmond “sometime in Fall 2011,” Chan said, and pending DPW approval, Clear Channel will build pedestal-style racks along Valencia Street in the Mission and Masonic Avenue in the Haight.

Until the report is issued, there isn’t much DPW appears able to do. Nobody at City Hall appears interested in the matter, which doesn’t please Petrelis.

“The city has got to address the blight of these pedmounts,” he wrote. “They are sitting empty and useless on public space.”

But they’re fulfilling the First Amendment and making Jefferson’s ghost proud, so there’s that?

Update 4:24 PM: Michael Petrelis responded to an earlier call from the Appeal, disputing Chan’s assertion that the newsracks must remain for First Amendment reasons.

“The First Amendment is alive and well on the web and does not give publishers perpetual rights to clutter public space,” he said, pointing out that “free speech is in no way abridged by the lack of telephone booths and coin-operated devices.”

Photo of Empty B of A Plaza newsrack: Michael Petrelis