Project Bandaloop may just be contemporary dance’s super hero equivalent. Bodies fly high in the sky, leaping off tall buildings with sure confidence and powerful precision. Rigged up with equipment similar to those used by climbers and rappelers, these dancers soar and spin where most only dream of going.

What: “Process as Adventure,” a multi-media viewing of video footage and conversation about the creation of “Bound(less)”

Where: The Great Wall, West Grand Between Valley and Broadway in downtown Oakland

Artistic Director Amelia Rudolph, the megamind behind this operation, spoke to me ahead of the company’s 20th season, explaining the heart of her company and expanding upon her new work “Bound(less)”.

This week’s two San Francisco events include one featuring past video footage of the company and a Q&A and the other a “Bound(less)” excerpt at Mint Plaza. “Bound(less)” premieres at the Great Wall of Oakland (bring your own chair or blanket!) next weekend. All events are free, and there’s also special VIP seating for a small fee.

Rudolph also added a caveat about what Project Bandaloop does, and it’s worth mentioning up front. She says, “Our systems are pretty down pat, in terms of the operations and technology of what we do. However, we are vigilant and constantly aware of double-checking, triple-checking our systems as [the dancers] enter on to the ropes… We’re really sensitive to being vigilant about any time that we feel we’re getting complacent about the techniques we’re using.”

In other words, kids, do not try this at home.

Becca Klarin: I’ve always wondered, the word “Bandaloop”: what does it mean to you and why did you chose it for the name of your company?

Amelia Rudolph: I don’t know how to answer what does it mean to me. That’s a whole other question. But I chose it kind of on a whim. When I first formed the company, I was reading the book “Jitterbug Perfume” by Tom Robbins, and in that book, he names a fictitious tribe of semi-immortals who live in caves in the central Himalayan mountains of India and they’re kind of gaudy shamans. They do many things that help them live for hundreds of years. And they’re called the Bandaloop and one of things they do that helps them live for hundres of years is the dance called the bandaloop. And so it’s sort of a whimsical and mysterious and sort of mountain and fiction-related word. I liked the sound of the word. Later, when we met Tom Robbins during a performance on the Space Needle, he gave us a… blessing for naming the company Project Bandaloop.

Did you invite him to come see it or was it a stroke of luck?

The presenter invited him. He came backstage and met us, and it was pretty cool.

So the Space Needle–that builds off of your themes of climbing and rappelling. What brought you to combine climbing with dance?

I’ve been a dancer my whole life. I began climbing in the Sierra in 1989, just over 20 years ago. And I fell in love with the sensation and experiences of climbing in the mountains, doing something that took that kind of mental focus and physical attention and strength while being in these affluently remote and gorgeous environments.

And I started to ask a couple of questions. One was, what would dance look like in one of these places in the mountains, including on cliffs? The other question I had was what do climbing and dance have in common physically and aesthetically, and what could climbing technology add to dance? And so I’ve been answer those questions for the past twenty years. 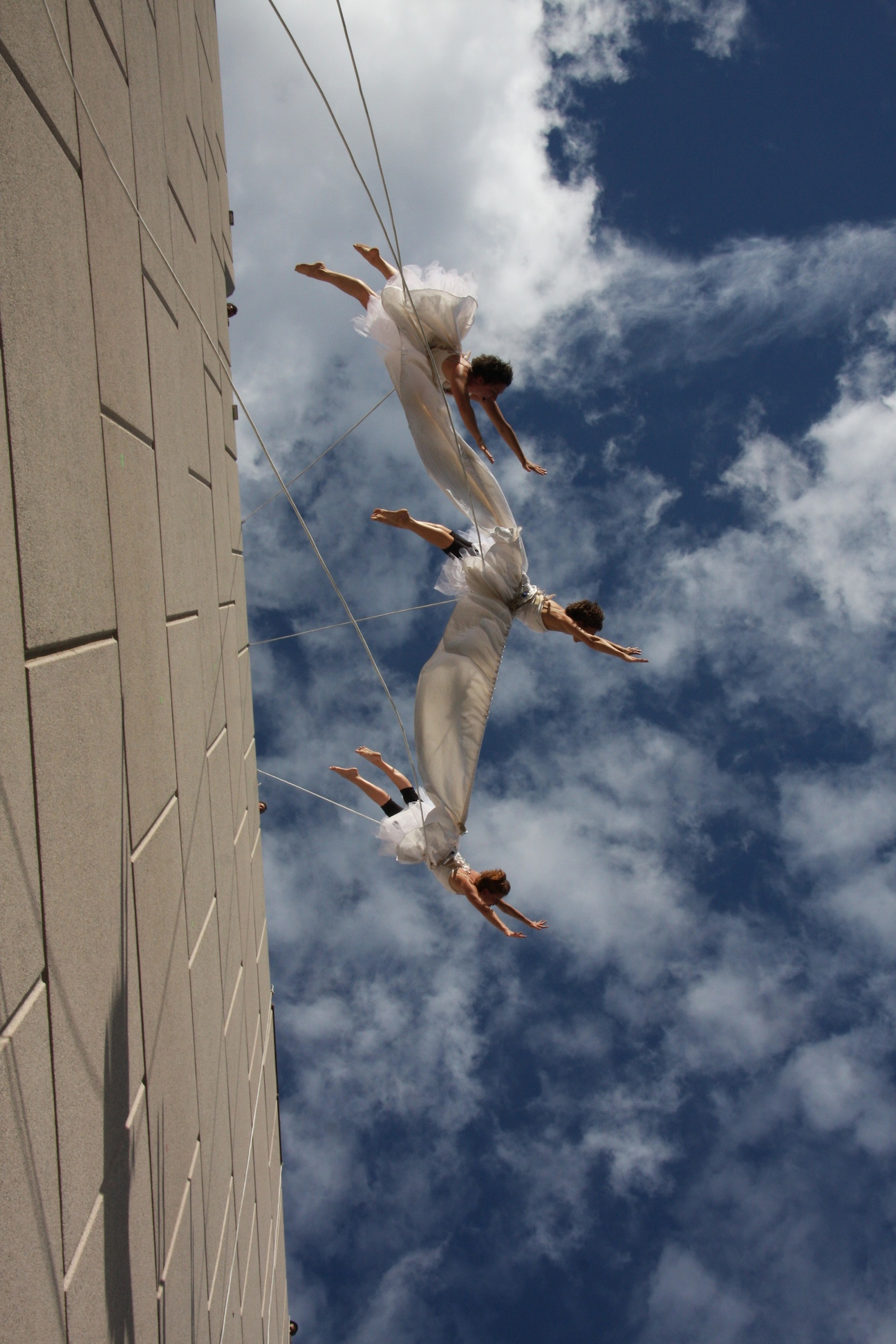 Absolutely. Everyone in the company is a highly accomplished contemporary dancer. But everyone beyond that has unusual core strength and general physical stamina beyond perhaps what a more traditional dancer has because of the nature of what we do: being in the mountains, hanging off a building for an hour or more at a time.

We’ve been rehearsing in Oakland on our wall, and people come by and watch the process of rehearsal all the time, and they can see while watching that we deal with many compounded issues beyond what you might have in the studios besides creativity and what’s working. You’re dealing with the literal stamina that the dancers have, for me to solve a choreographic problem with them while in the amount of time their bodies can take it.

Additionally, many things that I do as a choreographer, not only am I doing things that are solving creative problems–mixed in to that are logistic problems like how can we rig that? Can the dancer make it to the ground and back to the roof so that they can make their entrance in this next part of the piece. So there are a lot of logistics and safety management that goes into what we do at the level of complexity that we do it at.

Tell me a little about your thoughts behind “Bound(less)”.

The piece itself, “Bound(less)” is an exploration of how do we know who we are, especially in relation to other people and our environment. So the choreography is based on this idea. For example, one of the pieces involves three women wearing one dress. So they have to negotiate movement when they’re stuck together by this dress, but also the dress amplifies the three of them together into something bigger than the parts. It’s a metaphor and makes a visual statement that explores this idea.

Another part of the piece: a dancer sitting on a piece of furniture, hanging on the building, facing the audience, talking about identity and how it relates to the electronic universe and also contrasting it with what happens if there’s no power. Do we change? Who are we when the power goes out? And how’s that different from who we are with our multiple identities online?

Another dancer explores the idea who are we in our dreams. What do our dreams tell us about who we think we are? Are they a foil for who we are in our waking life?

From big group pieces where people are blended into a whole or literally tethered together as a group so that them are one to individual moments where eat dancer pops out of the choreography and you see them as an individual–however abstractly or explicitly, this piece circles around this idea.