A Primal Fear: Edward Albee’s “A Delicate Balance” at the Aurora Theatre 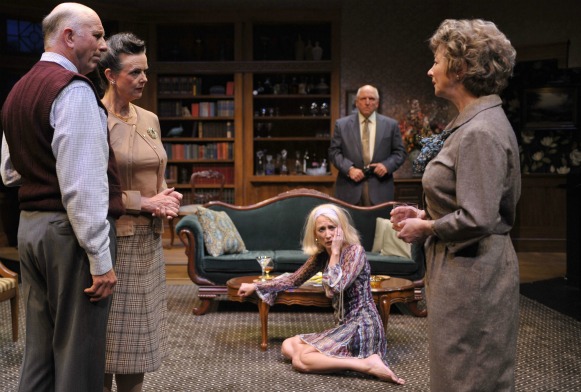 The Aurora theatre‘s intimate setup – the audience surrounds a small, unraised stage – suits Edward Albee’s A Delicate Balance: you have the pleasure of watching the faces of the audience across from you shift from abject horror to laughter, then back to abject horror.

Like so much mid-20th century drama, the circumstances are not, on the surface, horrific. To the contrary, they seem quite comfortable, steeped in the luxury that a bygone upper-middle class was actually able to afford.

Tobias and Agnes are an older married couple enjoying a safe, suburban existence that revolves around a country club membership and a seemingly bottomless liquor cabinet. Sure, this family has its blemishes – Tobias has a history of infidelity, freeloading sister Claire is a shameless alcoholic and infantile only child Julia is heading back home after a fourth failed marriage – but who doesn’t?

In fact, there’s even a sort of balance kept in place by these rhythms – Claire’s drinking, Julia’s failing to remain married, Tobias and Agnes’ affection for one another resting just slightly above extinguishment – that serves to obscure worrisome undercurrent.

But when Tobias and Agnes’ best friends, Harry and Edna, unexpectedly show up demanding refuge from a sudden, inexplicable sense of terror, equilibrium is lost. The group becomes territorial, mean, and increasingly drunk in the wake of this “invasion;” the closet begins to vomit skeletons as only the playwright behind Who’s Afraid of Virginia Woolf could make it.

It soon becomes clear that Harry and Edna have brought with them a contagious disease. This dis-ease, their fear, is the primal one that children sense in the dark and the middle-aged feel with the realization that more of life has passed than remains.

It is tempting to describe such fear with regard to mortality; a lesser playwright might have done so. In fact, as Albee demonstrates, the fear is best understood not through its object – what it is a fear of – but rather through the mechanisms we employ to make it tolerable. A child in the dark cries for his nightlight, or for his mother to keep her door ajar down the hall, not about the inevitability of death.

To this end, being a play about the second rather than the first half of life, A Delicate Balance explores the relationships we enter and maintain, whether by way of marriage, friendship or kinship, to promise shelter and comfort when the terror strikes.

As Albee makes awfully evident, these relationships can take a toll more costly than the terror they are meant to dispel. Claire’s relationship with liquor is a straightforward example. A marriage rooted in fear rather than love is a toxic compromise as well, and one that ultimately drives the character of Tobias into tragic despair. Then there is the question of whether, when the terror arrives, your supposed friends will have you at all.

The play pummels the audience with these lurking mortal quandaries, and in doing so it proves as moving as it is torturous. During intermission, couples held each other in long, desperate hugs.

As soon as the play was over, my party promptly headed to the closest possible bar for drinks as stiff as Claire’s. It’s a doozy.

A Delicate Balance is also somewhat claustrophobic, taking place entirely within one living room over the course of a martini-soaked weekend. If it weren’t for the healthy allotment of ensemble humor in the mix of Agnes’ caustic wit, Claire’s crass tipsiness, Tobias’ perpetual bewilderment, Julia’s hysterical antics and Harry and Edna’s audacious sense of entitlement (it isn’t long before they’re referring to the displaced and wildly incensed Julia’s room as “our room”), the play might very well prove intolerable.

The actors’ talent comes through clearly in this regard. With the exception of some rehearsed-feeling monologues by Agnes (Kimberly King) and at times distracting overacting on the part of Julia (Carrie Paff), the timing is on-point throughout.

Claire (Jamie Jones) in particular delivers the wildcard, screwdrivers-for-breakfast aunt par excellence. As a result, even with half the audience serving as background scenery, the play’s effect remains unbroken and absorbing.

A Delicate Balance takes the proud, uniquely American social arrangement known as “suburbia” and reveals it to be but a fragile barrier between civilization and plain old animal fear, liable to crack under the slightest pressure. Of course, Albee was writing at a time (1966) when such suburbia was made to seem the ideal endpoint for civilization – it was what we were fighting the Ruskies over. Today, Albee’s suburbia is on its way out; indeed, the very idea is beginning to feel dated, and as a result the play does as well. As evidenced by this audience’s reaction, however, it is clear that the terror (and the humor therein) remains more or less the same.

A Delicate Balance runs through Sunday, October 9th at the Aurora Theatre Company in Berkeley · Tickets