The Sexual Manifesto: A Bridge Between Us 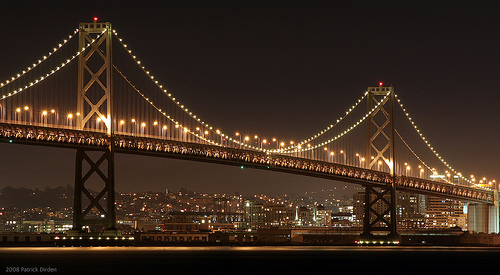 The East Bay is only several miles away, but to San Franciscans, it’s an eternity and a half. Its crown jewels of Berkeley and Oakland may have a robust gourmand scene, their own breweries and micropubs, a smattering of artisanal bars, and sunnier weather, but that’s hardly enough of a reward for stepping foot on BART or pressing pedal to the Bay Bridge. Not even sex–willing, eager, chickens-in-the-backyard sex–can tempt San Franciscans across the bay for very long.

On one end of the bay, there’s the Golden Gate Bridge–a suicide hotspot. People constantly debate about adding barriers to thwart jumpers. The bridge has patrols, restricted access at night, and suicide hotline telephones.

On the other end of the bay, there’s the Bay Bridge. There is no pedestrian traffic but never you mind–the bridge is a boner killer in and of itself. Many a relationship has crashed somewhere off the shore of Treasure Island. Well, more like just slightly east of the Embarcadero pavement.

The thing is once you make it to San Francisco–wherever you’re from (because, let’s face it, how many natives from SF proper do you know?), you don’t really want to leave. I mean, you’ll probably leave eventually: to Portland because you can’t get enough of urban farms and armpit hair on women, to New York because you want a “real” city, to LA because you’re a traitor. But the East Bay? Only if you’re thinking of the kids (and Marin was too expensive).

Oh, sure, you’ll jet over 15 hours to some third world country and then only talk about your travels for the next two months. But a BART ride to Berkeley is more inconvenient than a flight to Hanoi and unworthy of any bragging rights save for a Transbay Tube check-in on foursquare. It’s just silly to travel roughly two hours roundtrip for sex.

In contrast, East Bayers are actually eager to date in San Francisco. The city is already a destination, and they’re probably used to hopping on BART to visit…or better yet, they have a car and a FasTrak and haven’t yet grown hardened to parking in the city. Every date is a new adventure, a chance to explore a city with drastically different personalities for every neighborhood.

But relationships are push and pull, and sooner or later the San Franciscan will feel obliged to return the favor, dare to taint their soles on East Bay soil. It doesn’t last that long after that. Sometimes it won’t even last past the first tinge of guilt from insisting on home field advantage and then observing (removedly) your partner’s fretting over possibly missing the last BART train. Sorry, hun, that really sucks. And then you roll over and fall asleep to the zip zap of the bus running along the Muni cables.

Living in San Francisco makes your world a lot smaller. The city is not that big, roughly seven miles by seven miles. It’s even smaller if you’re honest about the zip codes you find date-worthy. Lop off the Avenues (sorry) and anything below Cesar Chavez, and that’s more like it. No wonder the bay seems so expansive. We’ve become accustomed to dating walking distance from our apartments.

Not that there’s a problem with that. The pleasure and convenience of living in a city are the proximity to everything: to food, to work, to sex. If good sex is only a walk or a cab ride away, then why would you bother schlepping anywhere else?

It’s sad that we’d nix a dating prospect just because of a few extra miles. But go ahead and try to fit dating in between your 9-to-5 and everything else the city has to offer. When you look at it that way, not living in the city becomes a character flaw much like an awkward fashion sense or a disdain for cheese. And who has time for such characters when you can find just as many flaws within city limits?