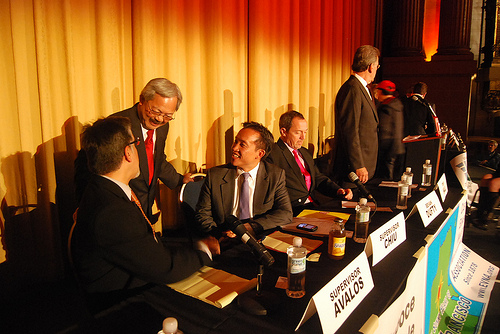 Lee was named interim mayor in January after former Mayor Gavin Newsom was elected lieutenant governor after pledging to return to his old job as city administrator rather than try to stay on as mayor.

But in recent weeks, Lee began to say he was considering joining the race, and he made it official today by filing papers at the city’s Department of Elections.

Lee joined 10 other candidates at a forum held tonight at the city’s Castro Theatre and hosted by the Castro/Eureka Valley and Duboce Triangle neighborhood associations, which provided the questions asked of the mayoral hopefuls.

While the candidates often addressed the questions at hand, many changed the topic to address the big story of the day, Lee’s entering of the race.

State Sen. Leland Yee asked the mayor to resign “now that the promise has been broken,” while David Chiu, president of the Board of Supervisors, questioned whether the “Run Ed Run” campaign that pushed him to run had broken any campaign finance laws.

Chiu is one of four mayoral candidates who are current and former board members who helped appoint Lee as interim mayor with the understanding that he would not run in November.

Another one of the four, current Supervisor John Avalos, didn’t mince words.

City Attorney Dennis Herrera noted that Lee did not initially want to take the interim mayor position but was pressured to by powerful people, and again acquiesced to others and joined the November mayoral race after refusing at first.

“Will he be his own man in the future, and stand up and say no and take unpopular positions? That’s what this race is all about,” Herrera said.

Another candidate, venture capitalist Joanna Rees, drew loud cheers from the crowd when she made a joke about Lee’s ties to influential Chinatown political consultant Rose Pak.

A few of the candidates came to Lee’s defense, including former supervisor Bevan Dufty, who said “you are no one until you’re booed at the Castro Theatre.”

Assessor-Recorder Phil Ting noted that, unlike the previous forums held in the race, with Lee’s entrance in the race “we actually have more reporters than candidates in the room” and said “none of the political attacks (on Lee) are going to make your bus come faster.”

But Lee mostly drew loud boos and hisses from the crowd–and even a few honks from an airhorn–while he answered questions posed by the moderator, which ranged from how to improve San Francisco Municipal Railway and create more affordable housing to controversial projects like Muni’s Central Subway project and AT&T’s plan to install boxes that house the company’s technology.

Lee largely avoided the charges made by the other candidates, saying “I’ve worked very hard to change the tone of government in the city, and the last seven months showed we can get a lot done when we set politics aside.”

Following the debate, Lee said he expected to hear some negative feedback about his decision from the crowd.

“I have no mind to it,” he said. “This is an open forum, people can express their views.”
His campaign spokesman Tony Winnicker accused the other candidates of filling the theater with their supporters to boo Lee, and accused the candidates themselves of teaming up with former Supervisor Chris Daly to oppose the mayor.

Daly was the lone member of the board to vote against Lee’s appointment, and Charles Kalish, a man who was arrested this morning after interrupting Lee as he filed papers at City Hall to run for mayor, was the co-creator along with Daly of a Facebook page called “Ed Lee’s a Liar” that encouraged people to confront Lee at tonight’s debate.

“What’s unfortunate is some of the candidates appear to be teaming up with folks like Supervisor Chris Daly to turn this campaign negative … which is exactly what Mayor Lee has tried to change during his seven months at City Hall,” Winnicker said.

The previous mayoral forums had typically included up to nine of the 30-plus candidates who have filed to run: Chiu, Avalos, Yee, Herrera, Ting, Dufty, Rees and former supervisors Michela Alioto-Pier and Tony Hall.

But Lee was not the only new participant in tonight’s forum. Terry Joan Baum, a Green Party candidate and Castro resident, crashed the stage with her own chair before the debate started and was allowed to stay there.

Baum said she was snubbed by the forum’s organizers, who she said told her last week that there was not enough room on the stage, but then added Lee at the last minute after he joined the race.

She was a crowd favorite when she was allowed to speak, and thanked the crowd for supporting her during her closing statement.

“They threatened to arrest me, but they knew damn well they couldn’t drag me out through all of you,” she said.

Photo: Chris Roberts, for the Appeal