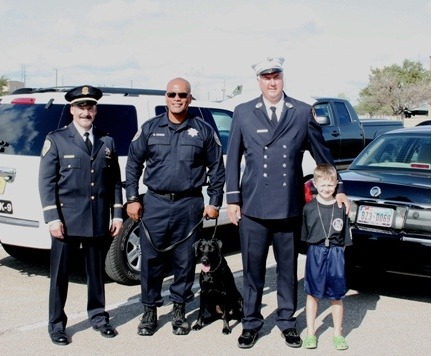 In a first for San Francisco, an SFPD officer and his dog have received a top honor from the Department of Homeland Security.

Officer Neil Fanene and his dog Sstack were recently awarded the “Top Dog” award at the Dept. of Homeland Security’s TSA course at Lackland Air Force Base in San Antonio, Texas. Fanene and Sstack received the honor July 29, marking the first time an SFPD officer has received this award.

The course, designed to train dogs and handlers in search techniques for aircraft, baggage, vehicles and transportation structures, is intended prepare participants to detect explosives and deter terrorism. Officer Fanene and Sstack are using their training in SFPD’s Airport Bureau.

Sstack, a nearly two-year-old Black Labrador Retriever, was named after fallen FDNY Battalion Chief Lawrence T. Stack, who died on 9/11 during rescue efforts at the World Trade Center. The TSA names puppies in their program in honor of 9/11 victims, all of which have names that start with a double first letter.

Members of Stack’s family were also in attendance for the ceremony, and a duplicate of Sstack’s badge was presented to his widow at the ceremony.