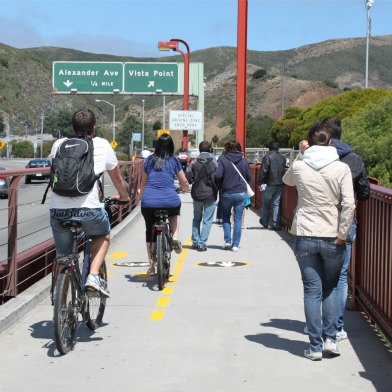 The lanes are intended to help guide pedestrians and bicyclists crossing the iconic bridge, after they were crowded together following the closure of the western sidewalk in May.

Moving bicyclists to the eastern sidewalk has caused much more congestion and confusion for travelers on the bridge, as up-to-4,600 bicyclists previously used the western sidewalk on a daily basis, officials said.

Officials have reported two solo bicycle accidents on the bridge during the two months since the closure, while in the last three years, only four accidents have been reported each year.

The decision to paint the lanes was reached by a collaborative effort between transportation officials, local bicycle activists, bicycle rental companies and representatives from the disabled community during a series of meetings over the last several months.

“It was a collaborative decision to put these advisory markings out there to ease the congestion by improving the flow,” said district spokeswoman Mary Currie.

Several options were considered, including dividing traffic by direction of travel rather than whether travelers were pedestrians or bicyclists.

But Kim Baenisch, executive director of the Marin County Bicycle Coalition, said there was a clear side of the bridge that pedestrians would be most likely to gather: “That’s the east side, looking back toward the city and Angel Island,” she said.

Currie agreed. “The pedestrians tend to be stopping for photos. They’re the ones that are stopping and pausing more often. The rental bike cyclists also do that, we’re hoping that they understand when they stop and pause they’ll pull into the pedestrian area because they’re pedestrians at that point. There will still be issues out there but we’re just hoping this will help the flow a bit,” she said.

Leah Shahum, executive director of the San Francisco Bicycle Coalition, said that while she hopes the new lanes will improve safety and comfort on the bridge, improvements have taken too long and the bridge district could take further measures to improve conditions.

“It’s frustrating that this has taken as long as it has to improve,” she said, noting that the western sidewalk closure is already half over.

She said other measures that could be taken to improve traffic conditions include better signage, better promotion of the situation and the challenges to safety, positioning bridge district staff on the bridge, and dedicating one of the auto traffic lanes for cyclists.

“We really think the bridge district should have considered dedicating one of the travel lanes for bike travelers,” Shahum said, noting that there is precedent for rededicating auto lanes, as three lanes were closed to auto traffic for runners of the San Francisco Marathon on Sunday.

The ongoing safety discussions were partly spurred by a proposal from the transportation district to enforce a speed limit on cyclists crossing the bridge because of concerns about the cyclist safety.

There have been 164 bicycle-involved accidents reported over the past 10 years, most of which were solo accidents. Speed contributed to 39 percent of the incidents, according to the transportation district.

But the speed limit proposal drew skepticism from local bicycle activists. “Bicyclists thought that wasn’t the solution for a variety of reasons,” said Baenisch, including that most bicycles do not have speedometers, and that a safe speed is dependent on traffic conditions.

Currie said that the new advisories seem to be working well, and that the speed limit idea will not be examined again until September at the earliest.

“We’ll come back in the fall sometime to see where we are with the speed limit,” she said.