When BART’s shutdown cell service last Thursday to prevent a rumored protest, they opened Pandora’s box, it appears — despite assertions that they were within their ethical and legal rights to do so, the move instead prompted a hack of a BART-related website and threats of a protest for 5 PM Monday night at the Civic Center BART station.

As of 5 PM, there is a “handful” of protesters at the Civic Center platform, holding up banners and signs.

According to Chris Roberts, who is on the scene, “and there are more arriving, Telltale bandannas current around the neck boy-scout-style.”

Up in UN Plaza, Roberts says, there are “Groups of protesters consulting pieces of paper and phones.”

5:08 PM: About 100 people with signs upstairs at UN Plaza, says Roberts, garbed in bandannas, hoodies, Oscar Grant patches. “Nobody doing anything, all waiting…air is beginning to feel tense.”

Some resources: Above, you can see a Ustream feed from the demonstration — the audio seems to be working better than the video.
Here is the BART Live Audio Feed for the BART police scanner

5:19 PM: “There are a lot more masks showing up” says Roberts, who is leaving UN Plaza and is headed down to the BART platform. Wish his cell signal luck!

5:21 PM: Cell signal is still on at platform. “Hah. Just saw a BART cop on his cell phone” says Roberts.

Trains are not stopping at Civic Center, and escalators and stairs have been closed to prevent people from reaching the platform.

5:27 PM: A BART police officer just read the unlawful assembly order, says Roberts, which is typically what police do right before they start arresting people.

5:32 PM: Everyone is leaving Civic Center, reports Roberts. A large group is apparently headed eastbound down Market Street. Several are reportedly blocking traffic on the street.

Riot-gear clad police are continuing to block the entrance to the BART station.

5:37 PM: All the protesters have left the BART platform, which remains closed. Roberts says BART police confirmed that no arrests were made, and that the decision to close the station was made “because of safety.”

5:40 PM: The SFMTA confirms that “Muni Metro service is not stopping at Civic Center Station due to the BART protest closure of the station.”

“Also, service on the Powell Street portion of the Powell-Mason and Powell-Hyde cable car lines is being provided by Muni bus shuttle.”

5:45 PM: Protesters are headed in several directions. Roberts says one group tried to enter Powell station “but there were too many cops,” and they’ve bunched at 4th and Market.

Another group of “maybe 30” is at Market and Van Ness, chanting “no justice no peace/disband BART police.” 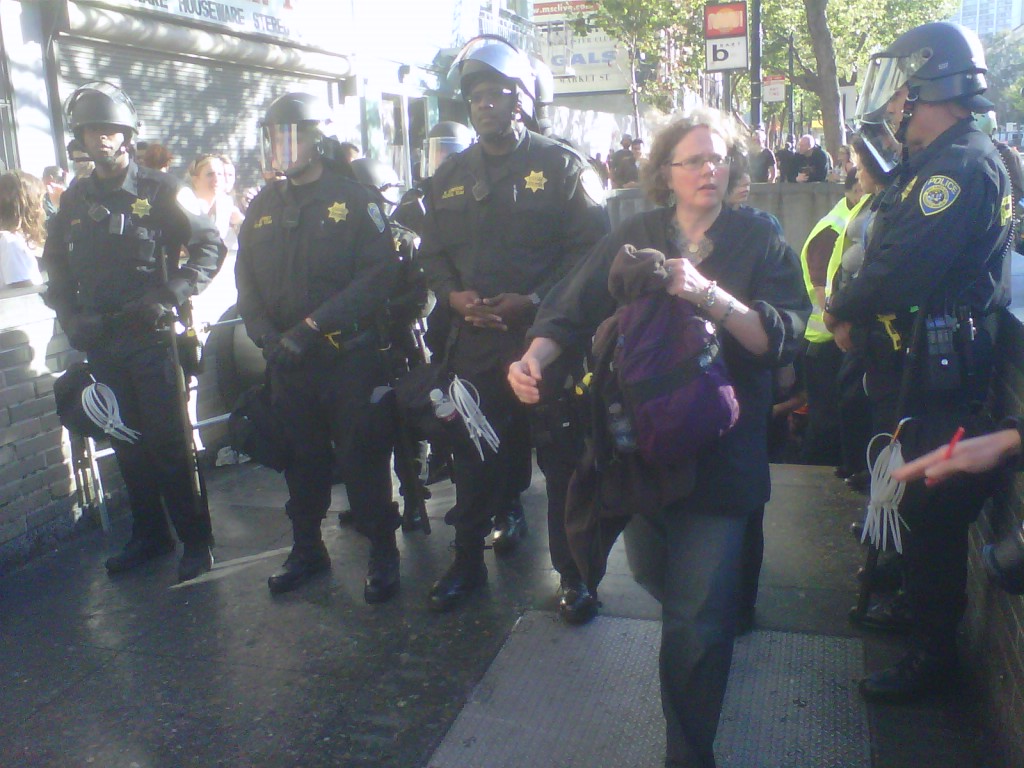 5:52 PM: Powell Station has been closed, and according to the SFMTA, “As of 5:40 p.m., Muni Metro service is not stopping at Civic Center or Powell stations due to BART protest closures.”

Roberts says another, larger group is marching up Market back to Powell Station.

5:56 PM: BART has sent an email confirming that Powell Station is closed, and that “Civic Center Station now open for disembarking passengers but not for
passengers wanting to enter the BART system there.”

And this is interesting: “BART Chief Communications Officer, Linton Johnson, is not available for interviews effective immediately due to the fluid nature of events.”

The SFMTA confirms that “As of 5:57 p.m., Muni Metro service is not stopping at Montgomery, Powell or Civic Center stations due to BART protest closures.”

6:08 PM: Roberts says that people seem to be converging on Powell station again, “only about 20 though…many are hanging back at Civic Center.”

6:16 PM: According to SFMTA spokesperson Paul Rose, the three stations remain closed, and Muni Metro is not stopping, even to let passengers off. He says they are running buses in place of Metro service. 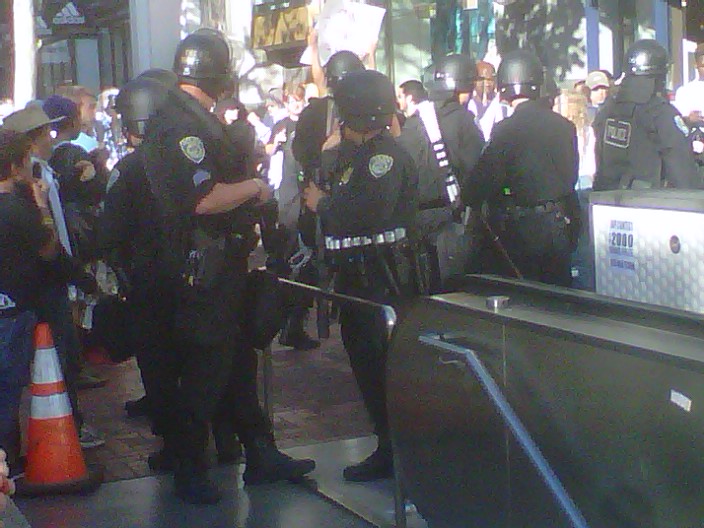 6:26 PM: Protesters were also briefly in the Ferry Building, with maybe 30-40 people in masks and bandanas marching and chanting. “They just marched through and left” said one person from the scene.

6:36 PM: “This shit was short-lived” says Roberts. “I think it’s over. Two kids in Fawkes masks back downstairs, at Civic center, Cops eyed them warily as they walked through one end of Civic Center and out the other.”

“Yep. it’s over. Fawkes kid I was trailing popped up his mask and lit a smoke.”

6:44 PM: According to BART spokesperson Jim Allison, Embarcadero Station has been closed to entry (it’s open to exit) to prevent overcrowding.

According to Allison, BART did not disrupt cell phone service at any time during the protest.

6:54 PM: According to the SFMTA, “As of 6:48 p.m., Muni Metro service is not stopping at Embarcadero or Powell stations due to BART protest closures.”

According to Bay City News, as of 6:45, demonstrators were shouting at riot police who were posted at entrances to the Embarcadero BART station.

As the group moved past several BART stations that had been temporarily closed because of the protest, bystanders — including rush hour commuters on their way home from work — audibly expressed anger at the protesters over the inconvenience caused by the service disruption.

Some people made angry gestures at the crowd and shouted at them. One protester responded, “What’s more inconvenient: missing your train or getting shot by a cop?”

7:22 PM: According to BART, Embarcadero Station is now fully open, and Powell Street Station still open for disembarking passengers only but not
for passengers wanting to enter the BART system there.

The SFMTA says that Muni Metro service has resumed stopping at Embarcadero Station, but that service is still not stopping at Powell Station.

7:36 PM: According to BART, all BART stations are now open. Trains are, they say, running on time.

According to the SFMTA, Muni Metro service has resumed service at Powell Station. They expect cable cars will to return to service by 8 PM, the Powell stretch of the cable car line had been replaced by shuttle buses during the protest.

7:47 PM: BART sent out a handy list of what station was closed when. Want to see it? Here it is! 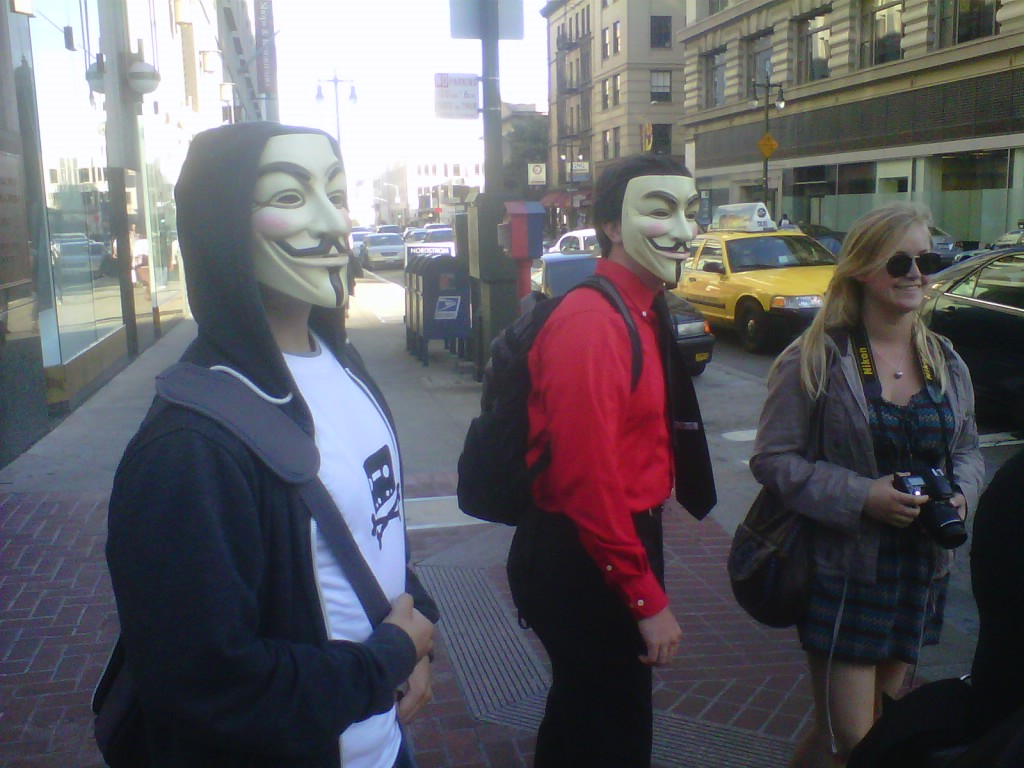