McAllister Street Getting Set To Go Both Ways This Week 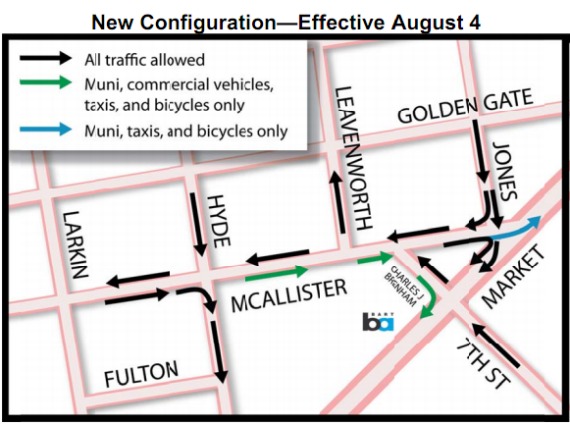 Starting Thursday, a part of McAllister Street between Hyde and Market streets will be converted to two-way traffic after previously only allowing westbound traffic.

The new configuration will allow Muni buses, bicycles and taxis to travel east on McAllister Street all the way to Market Street, where they can either turn left or right. All eastbound traffic previously had to turn right at Hyde Street.

The change, which involves repainting the road and installing new overhead wires above the street, will save up to three minutes per trip for riders of the 5-Fulton bus line, saving Muni more than $200,000 per year in operating expenses, spokesman Paul Rose said.

“The more efficient and faster we make Muni, the more we can save on operating costs,” Rose said.

As part of the reconfiguration, commercial vehicles such as tour buses and big-rigs traveling east on McAllister Street will also be able to continue east before having to turn right on Charles J. Brenham Place, an extension of Seventh Street between Market and McAllister streets.

All other eastbound traffic will still have to turn right on Hyde Street.

Rose said the change was made as the result of the agency’s search for potential cost savings and increased efficiencies in the city’s traffic network.

Although the change will go into effect for drivers on Thursday, the change to the 5-Fulton bus route will take effect at an undetermined date later this month after the new overhead wires are tested, Rose said.