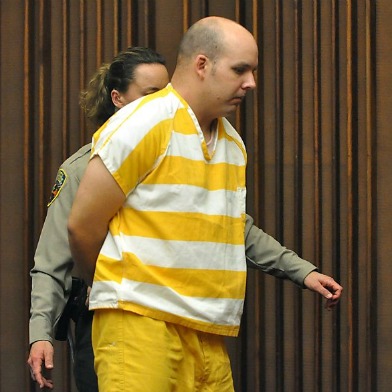 5:55 PM: After scathing comments by the mother of his deceased ex-girlfriend, James Mitchell, heir to the Mitchell Brothers adult film and theater business, asserted he did not kill 29-year-old Danielle Keller two years ago on the couple’s daughter’s first birthday.

“I didn’t kill Danielle. I still love her very much,” Mitchell said.

Mitchell, 29, of Pittsburg, testified at his trial that he struggled with two men who were fleeing Keller’s Diablo Court home when he arrived on July 12, 2009 with the intention of seeing his daughter on her birthday.

He said the men were trying to kidnap his daughter but he managed to free her, and during the struggle, one of the men struck him with a bat.

He testified he heard someone scream for help and he started walking to the back of the house. Mitchell said he left with his daughter when he heard someone say, ‘call 911’ because Keller had a restraining order against him and he did not want to be there when police arrived.

The jury did not believe Mitchell’s story and convicted him of all charges except an allegation that he killed Keller so he could kidnap their child.

He was sentenced today to 35 years to life in prison for first-degree murder, use of a weapon, and kidnapping. Judge Kelly Simmons stayed imposition of the sentences on the other counts regarding stalking, child endangerment and domestic violence battery.

“He has zero insight. It sounds like he’s convinced himself,” Cacciatore said.

“He’s a total sociopathic, entitled, trust-funded liar. Thank God I’ll probably be dead before he has a chance of being paroled. He’s in denial to this day,” Keller’s mother Claudia Stevens said after the sentencing.

“How could you claim not to have seen her in that pool of blood?” she asked Mitchell.
She said Mitchell, in custody and dressed in yellow pants and shirt, was “born with a sense of entitlement.”

“But he’s not entitled to Danielle. He robbed the world of a kind, loving soul and a mother of her child,” she said.

Stevens said Novato police would not let her into her daughter’s home but had her wait in her car the evening of the murder.

“I left my daughter face down on the ground. Leaving her behind is the hardest thing I’ve ever done,” Stevens said.

She also said Mitchell held her, Keller and the couple’s daughter hostage in her home on June 26, 2009.

“I wish the police had taken my complaint seriously after he held us hostage. Would we be here today?” Stevens asked.

Mitchell then accused Stevens of having drug and alcohol problems.

“Claudia’s not sober today in court,” Mitchell said before accusing her of craving attention.

“I was just born under my father’s name,” Mitchell said.

Jim Mitchell was convicted of killing his brother Artie in 1991 in Corte Madera. He went to prison for the manslaughter and died on July 12, 2007.

“I stayed strong for my daughter and Danielle,” Mitchell said at the beginning of his address to Judge Simmons. “If there is a God, I know she is there now and is watching,” Mitchell said.

Mitchell hired three attorneys to represent him and fired two of them.

Before sentencing today, he asked the judge to relieve Stuart Hanlon, his current attorney, and appoint yet another lawyer to file a motion for a new trial. Simmons denied the requests.

Mitchell called the trial court proceedings “a perversion of justice.”

He also asked the court and the media “to leave my daughter out of this.”
“I wish my daughter the best,” he said.

Diablo Court neighbors testified at the trial that Keller was shielding her daughter under her body while she was beaten to death in the head with the bat.

12:54 PM: James Mitchell, the heir to the Mitchell Brothers adult film business, was sentenced to 35 years to life this morning for killing his ex-girlfriend, Danielle Keller, and kidnapping their young daughter two years ago.

Mitchell, 29, of Pittsburg, was convicted of bludgeoning Keller with an aluminum softball bat at her Diablo Court home in Novato on July 12, 2009, the child’s first birthday.

He was arrested several hours later in Citrus Heights, Calif., and the couple’s daughter was found safe in his car.

Marin County Superior Court Judge Kelly Simmons sentenced Mitchell to 26 years to life for first-degree murder and use of a weapon, and nine years for domestic violence battery and kidnapping.

Mitchell addressed the court this morning, again denying he killed Keller. He called the case “a big circus from day one.”

“It was nothing but poison in the water and a flock of sheep running over a cliff at the sound of ‘James Mitchell,'” he said.

He said he never wanted any part in the family business.

“I was just born with my father’s name,” he said.

Mitchell said he still loves his daughter and Danielle. He testified during the trial that two other men were at the Novato home when he arrived there for his daughter’s birthday party on the day of the murder, and said they were responsible for the killing.