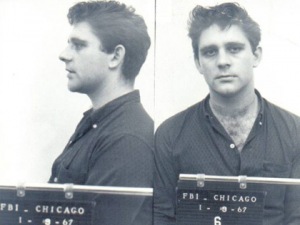 For 36 years he was in the trucking business. He married, raised a family, separated from a wife, and was for a decade, living with another woman. Unbeknownst to his new family and employers, he was also evading the law over a SF crime that turned into homicide.

As the Associated Press reports, 66-year-old William Walter Asher III was arrested Friday in Salida, a town 70 miles south of Sacramento. Asher had been sentenced to life in prison at age 20, after participating in the robbery of an SF bar during which a bartender was shot and beaten to death.

According to court records,

At almost the stroke of midnight the defendants opened their coats and withdrew weapons. Williams had a sawed-off shotgun which a patron recognized as a 12-gauge single barrel weapon. Asher and Carrafa had pistols. Williams said, “This is a holdup. Don’t make a move, and don’t anybody do anything wrong.put your hands on top of the bar.” Williams walked up to Kammeyer saying, “I’ll show you who to call a punk.” He put the shotgun in Kammeyer’s back, pressed the trigger and the weapon discharged. Kammeyer fell, mortally wounded.

According to CNN, “eight years into his sentence, Asher escaped from a prison in El Dorado County, California — aided by a female accomplice.”

Asher was found after investigators accessed his late mother’s phone records, where investigators discovered Asher was living under the assumed name of Gary Donald Webb.

“Although the trail went cold over the years, investigators never gave up their hunt for Asher and recently got the break they needed,” the FBI said in a press release.

When investigators finally tracked Asher to his home in the CA town of Salida, the 66-year-old was taken into custody without incident.