Don’t Go To The Bathroom With This Guy: SFPD Releases Sketch Of Candlestick Assault Suspect 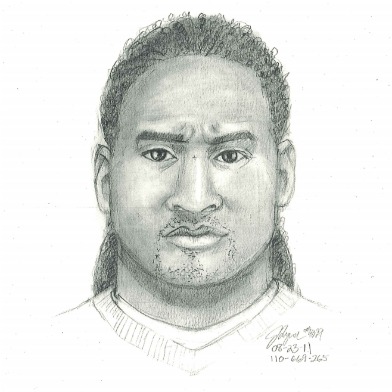 San Francisco police released the sketch today of a suspect they believe brutally beat a San Rafael man in a Candlestick Park restroom during a preseason football game between the San Francisco 49ers and Oakland Raiders last weekend.

The 26-year-old victim was assaulted and knocked unconscious in an upper-level restroom at the stadium sometime between 7:15 p.m. and 7:45 p.m. Saturday.

He was in fair condition at a hospital as of earlier this week, according to police.

Police are seeking a suspect in the case that is described as a Pacific Islander man between 25 and 30 years old who is between 6 feet 3 inches and 6 feet 5 inches tall and weighs between 225 and 260 pounds.

He had a goatee and long, curly hair tied in a ponytail, and was last seen wearing a white T-shirt and blue jeans.

The beating was part of a rash of violence in and around Candlestick Park that night, which also included two shootings in the parking lot.

Neither of the shooting victims’ injuries are believed to be life threatening, hospital officials said.

No arrests have been made in connection with the shootings, which are being treated as separate cases, police said.

Several other fights in the stands and parking lot were caught on amateur video.

In response to the violence, the 49ers are recommending the NFL suspend the annual preseason game between the two Bay Area teams.

In addition, 49ers officials have said the team will tighten security and crack down on tailgating during or after games at Candlestick Park for the team’s games this year. Tailgating will still be permitted before games, team officials said.

Police booked 12 people into jail Saturday on various offenses, while the average is one or two per game.

Anyone with information about the restroom beating or shootings is encouraged to call the Police Department’s anonymous tip line at (415) 575-4444 or send a tip by text message to TIP411.