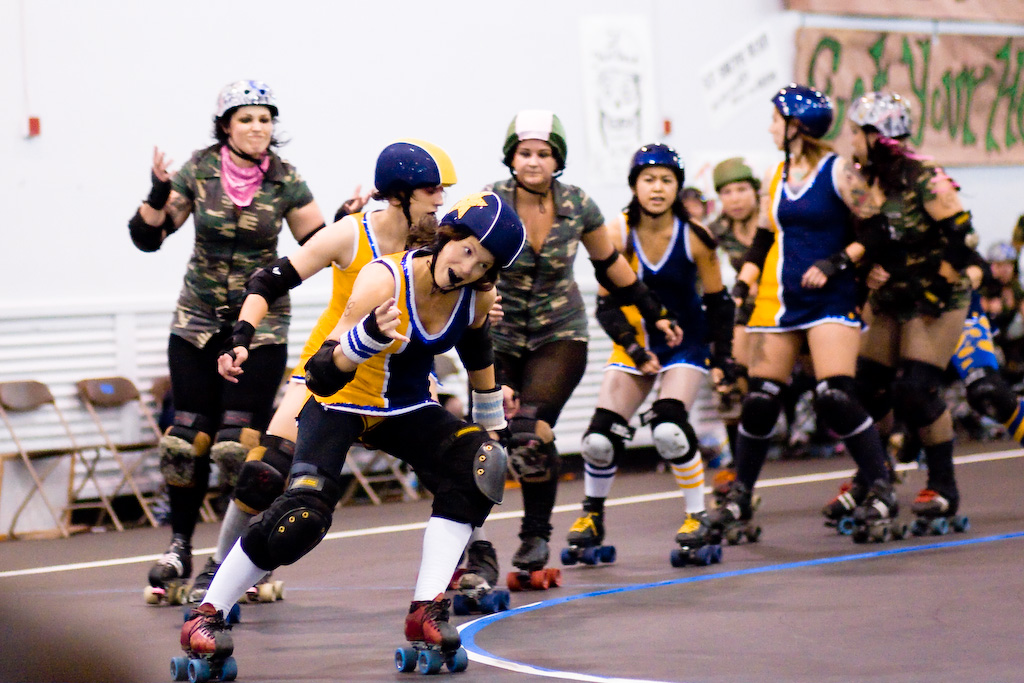 Beginning in Texas, the last decade has seen an international upsurge in roller derby. The movement, while still focused on competitive sport, has come in the form of grassroots leagues such as the B.A.D. Girls. That irresistible acronym stands, of course, for Bay Area Derby Girls. If you don’t know what roller derby is, just imagine a less structured version of hockey (hold the ice — and the puck!) but with full contact, extra aggression and playful feminist attitudes. Or you can just do your homework and watch Whip-It.

Formed in 2004, B.A.D. is a non-profit organization run collectively by its members, totaling over 120. Since nearly all the women have their own full-time careers to contend with, B.A.D. might seem like just an extra-curricular activity to the newbie — but the girls all share a fervent passion for the sport. Not to mention they all have their own unique aliases on the roller rink (and I don’t just mean Roller Girl).

“On our home teams, there’s competitiveness,” says Robin Detterman aka Chantilly Mace, one of the B.A.D. Girls. “But we are good at leaving it there and having a beer at an after-party. It’s a pretty remarkable community.”

Detterman is one of about 22 women in the roster for the Bay Area All Star team. The B.A.D. league is divided up into different teams for different cities in the Bay Area. There’s the San Francisco ShEvil Dead, the Richmond Wrecking Balls and the Oakland Outlaws, to name a few. The All Star team is comprised of the top players from each team.

“It’s such a broad range of women from such different life experiences,” Detterman says of the volunteer-based league. “There’s the competitive part of skating but also the running a business together cooperatively that brings us back to being friends at the end of the day.”

Four years ago, Detterman was in New Orleans when she saw a local team play. “I couldn’t believe I hadn’t heard about it,” she says. “I wanted to do it.” And the rest is history.

In spite of all the fun and games, the B.A.D Girls are currently amid difficult circumstances. As has been widely reported, the team lost their “entire financial reserve” after garnering the championship at the Craneway Pavilion on July 9 when two league members transporting the money were robbed at gunpoint.

The SFPD investigation of the incident, which occurred in the Mission District around 11 p.m., is still underway. No one was hurt, but the loss was crippling financially.

“We lost the full amount of what we made,” Detterman says. That money would have gone toward expenses for future tournaments, which usually sell out or come close to it.

“We’ve had some donations, which has been really touching, locally and across the nation. We’re hoping people will come out and see what we’re all about.” Detterman says this is top-level derby that people don’t usually get to see.

The girls hope to make up those lost funds this weekend at the Golden Bowl 3-day tournament, which showcases “the strongest level of competition the Bay Area has ever seen in Flat Track Roller Derby,” says the B.A.D. website.

Beginning August 12 through 14, the Oakland Convention Center will be host to top teams from 4 states: the B.A.D. All Star Team, the Windy City Rollers from Chicago, the Texecutioners from Texas and the Detroit Derby Girls.

Detterman says this is the final B.A.D. bout of the season, and attendance will ensure that the B.A.D. legacy will live on.

Buy tickets for the event here. All tournaments begin at 7 p.m. The Oakland Convention Center is located at 550 10th Street.