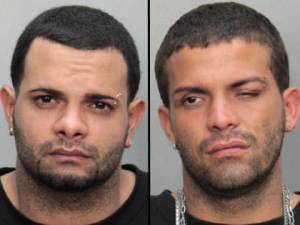 Last night, two men were arrested at Miami International Airport after one of them reportedly punched an American Airlines pilot. American Airlines flight 1755 was headed to SFO but returned to the gate after Jonathan Baez, 27, had appeared unresponsive and intoxicated. He was sleeping and not wearing his seatbelt and when a flight attendant tried to wake him and noticed his condition, alerting the pilot to return to the terminal. As Baez was being taken off the plane, his brother Luis Baez, 29 decided to get involved and defend his brother.

As CBS reports, Jonathan initially left the plane without incident but Luis became belligerent and threatened the pilot, saying, “When you fly to San Juan, I will have you killed.” Both brothers are from Las Piedras, Puerto Rico

Moments later, after both men left the plane, Jonathan reportedly returned and punched the pilot in the face. A flight attendant who tried to break up the fight was hit in the shoulder. The brothers again returned to the jet bridge to walk towards the terminal, with the pilot behind them. They then reportedly jumped him again and continued beating the pilot.

As ABC7 reports, as the final attack began, passengers jumped in to help save the pilot.

Passenger Ken Venting of Scotts Valley came to the pilot’s aide and has said about the incident, “There was a scuffle that took place, so about three or four of us went out there and tackled the guys. There were two of them and I guess the pilot ended up with some contusions on his face. So we just did what we needed to do to help out.”

The brothers were then taken into custody and transported to the Miami-Dade County jail. They have been charged with aggravated battery, aggravated assault, and simple battery. The FBI is also involved in the investigation because assaulting an airline crewmember is a federal offense.

A few hours later, the plane was able to take off with a different pilot. It arrived at SFO early this morning.