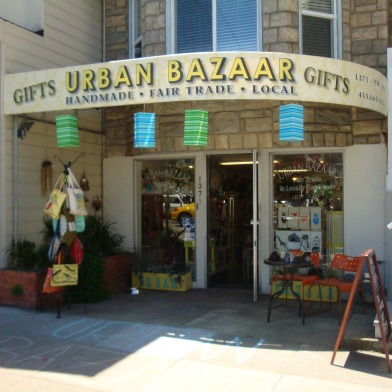 At 9th Ave. and Judah St. in Inner Sunset is an assuming storefront flanked by apartment buildings and tucked beneath the Stanford Jazz Society. This is Urban Bazaar, your neighborhood not-so-ordinary boutique.

Co-owned by Brandi Chalker and Briana Bers, two craftswomen who both went to SF State, the Bazaar (1371 9th Ave.) is a socially conscious gift shop whose mission is to “provide people with affordable, ethically sourced merchandise,” says Chalker. Urban Bazaar opened its doors to the handmade-gift-grabbing public a year ago. This Friday, Chalker and Bers will host a celebration for the store’s one-year anniversary.

Upon entering, mobiles made from banana fiber hang from the ceiling. Like all items in the story, these have their own story card documenting the product’s history and its own little Fair Trade life cycle. A selection of wacky finger puppets, for example, comes from Peru and Ecuador. But some goods have origin stories from our own backyard. One of Urban Bazaar’s most popular items is the baby onesie with a diagrammatic print, made by SF’s Girls Can Tell.

What: Urban Bazaar’s One Year Anniversary Party
When: Friday July 22, 7-10 PM (but they have free cupcakes all day)
Where:1371 9th Ave, between Judah and Irving

The Bazaar specializes in housewares, jewelry and a bevy of bric-a-brac that’s too charming to resist. I was especially struck by the Twin Peaks buttons. Bers, for one, makes necklaces from guitar picks that say “Pick Me!”

“Everyone loves a good pun,” she quips in an e-mail. Indeed. She also makes notebooks from recycled DVD and book covers. Nothing says “Dear Diary” like a ravenous Hannibal Lecter on the jacket.

“Basically I enjoy finding things that would normally be on there way to the dump and give them new meaning and purpose,” Bers says.

Another hot, SF-centric item is the bicycle tire belt. Made from recycled tires, these belts bring something fresh to the ensemble of DIY-looks ubiquitous in the Bay. These belts are just one of the prizes offered at the one-year anniversary party, where patrons can purchase raffle tickets that benefit Freedom House, a women’s shelter for victims of human trafficking.

Beyond the display of mobiles, jewelry, sun catchers and SF neighborhood artwork — and much, much more — is the garden. A walk-in closet-sized greenhouse, which Chalker expects to open for viewing by this Friday’s fete, stands in the center of the backyard. Inside are succulent arrangements, another of Chalker’s interests, that will be available for purchase by mid-August. Urban Bazaar will offer a kind of DIY nursery and planting bar where people can pot their own succulents in concrete vessels or biodegradable rice husks and take them home. This is just one of the shop’s innovative offerings of made-at-the-source goods.

Like any start-up, Urban Bazaar had humble beginnings. In college, Chalker was politically active and interested in Fair Trade. Bers had a passion for recycling and reusing things. And the rest is history.

Except one thing: Urban Bazaar began in part thanks to SF’s Revolving Loan Fund. Facilitated by the office of the mayor and a non-profit called TMC Working Solutions, this loan stimulates economic growth and employment by aiding small business owners.

“I have always wanted to own my own business,” Bers says. “I decided I wanted to do something like that for not only myself, but others like me who wanted to make a living doing their own creative thing.” This is the conceit of Urban Bazaar. Artists and artisans can bring in their own creations to sell at the Bazaar.

Rarely these days do we know exactly where our stuff is coming from. Slap a “Made in China” tag on anything and we feel a sick sort of comfort. But the boutique is trying to trouble that truism.

“Aside from our patrons benefiting from Urban Bazaar, our local and Fair Trade artisans do as well,” Bers says. “We are a place where local artisans can gain exposure and followers and hopefully quit their ‘day jobs’ to make their awesomeness full time. And the Fair Trade artisans are compensated fairly which helps them support themselves and their families, while creating in safe, healthy working conditions.”

This Friday, 7/22, Urban Bazaar kicks off the anniversary party with an 11am cake-cutting ceremony (“like a ribbon cutting, only tastier,” reads the website calendar) and free cupcakes til they’re gone. At 7pm begins the party, stocked with beverages and crafting tables set up in the backyard. You can also buy raffle tickets for Freedom House that night — one of the prizes is a Junior Deluxe One Night Stay at SF’s Hotel Adagio. The raffle goes until 7/24.

Urban Bazaar brings a socially sentient alternative to mass-produced goods to SF. And also, it’s just plain fun to shop at. There’s a real sense of community in this modestly scaled space. “People know our name around the city now,” Chalker says.

Check out Urban Bazaar’s website. You can shop online, too.