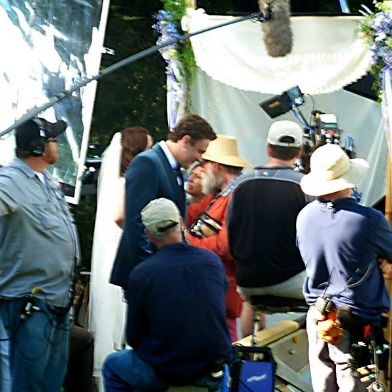 It seems as of late SF is the place to be when it comes to filming and being a little douchey. As Haighteration reports, an upcoming (we’d assume) rom-com is filming right in Alamo Square. Dubbed “The Five-Year Engagement,” the film reportedly charts the ups-and-downs of an engaged couple’s relationship.

Actor Jason Segel stars in it and co-wrote the script. Starring alongside Segel is Emily Blunt. Chris Pratt of NBC’s Parks and Rec and Mindy Kaling from the Office also reportedly appear in the movie, at least, Haighteration spotted them yesterday on set, where (SPOILER) the scene appeared to be the wedding ceremony between Segel and Blunt. Sadly, the romantic mood didn’t translate to real life.

Haighteration notes that a German tourist was accosted by an assistant while trying to take a picture of his wife in front of the Painted Ladies and skyline.

Said the tourist, “I just want a picture of my wife with San Francisco in the background!”

The assistant, apparently claiming the entirety of SF as movie property reportedly roared back, “No! You want a picture of our set!”

The problem was quickly resolved when another crew member jogged over to calm the high-strung assistant and let the couple take their picture.

Then again, perhaps the crew’s crabbiness was just a sign of how long they’d been working on the film — before they arrived in SF, they shot for two months in Ann Arbor, Michigan, ending their time in the pleasant peninsula at a local karaoke bar.

The SF shoot for the movie’s expected to end on July 8, so keep your eye on local karaoke bars and maybe the delis: Segal told Collider “I’m on this leading man diet right now because I have to be the sexy guy in this movie. I’d really like to eat a Reuben. I think the day we wrap, I’m going to have a serious Reuben.”