Stalk The California Academy of Sciences Penguins Online, Via Smartphone 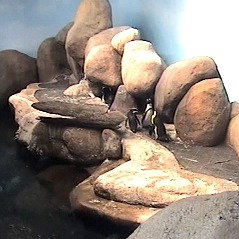 The California Academy of Sciences in San Francisco wants to put penguins in your pocket.

The app, which is free and available to both Apple iPhone and Google Android users, allows people to toggle between three different cameras in the exhibit to watch the birds 24 hours a day.

The African Penguins, an endangered species because of commercial fishing, oil spills and predation, are among the Academy of Sciences’ most popular exhibits, academy spokeswoman Helen Taylor said.

The new app is “a great opportunity for us to share the experience of watching them with a greater audience,” Taylor said.

The animals can be seen courting each other, establishing and defending territories, and collecting material for nests, Taylor said.

“As it gets closer to bedtime, they start to lie down, and during feeding time they can be more active,” she said.

People watching the live video feed on Thursday will get to see staff celebrate the fourth birthday of one of the penguins, Pete, during feeding times at 10:30 a.m. and 3 p.m. The video feed is also available on the academy’s website.

Of course, visitors to the academy can also see the birds in person at its African Hall.